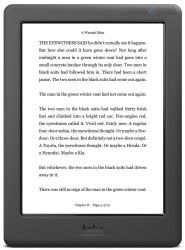 Kobo started rolling out a new firmware update this week. Update v3.16 is not available for all Kobo devices, and according to the discussion thread over at MobileRead it has been made available for the Kobo Glo HD and the Kobo Touch.

Like most updates, v3.16 adds a couple features and fixes a number of bugs. The initial report says that Kobo added a new Wifi menu, a new search option, and (on the Kobo Touch) a new UI.

The new search option is perhaps the most interesting. In addition to the existing "Bookstore" and "Library" searches, readers can now also search all annotations and the dictionaries. They also have the new option of searching in the last 5 ebooks they opened (now that is nifty).

Some smaller changes that were included and mentioned in the betas were:

[…] Kobo Updates Latest E-Reader (Ink, Bits & Pixels) Kobo rolls out an update to the Glo HD, its newest e-reading device aimed at the premium end of the market, as well as the Kobo Touch. In addition to fixing some bugs, the update also expands readers’ search capabilities. […]