is still the one and only gadget maker to release a smartphone with both an E-ink and an LED screen, and they’ve just launched the Yotaphone in the UK.

The Yotaphone, which launched in Germany and Russia last December, is now listed with a UK retail price. It now costs £419, a couple euros higher than its 499 euro retail price, and about £10 cheaper than the new 8GB iPhone 5c. 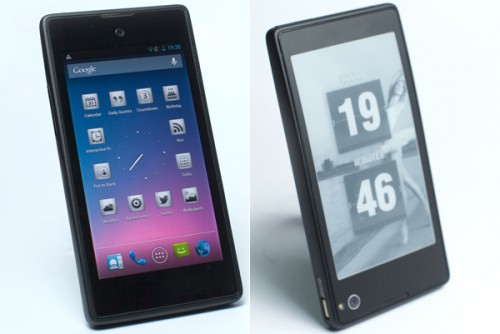 In terms of connectivity, the first-gen Yotaphone has Wifi, BT, GPS, FM Radio, and support for LTE and GSM cell networks. It also has bevy of sensors including  an accelerometer, compass, gyroscope, proximity sensor, the kitchen sink, and an ambient light sensor.

This phone retails for 499 euros in Europe. It hasn’t been launched yet in the US, but Yota Devices has stated that they planned to do so. But if you ask me I would bet that we are more likely to see the second-gen model instead. That device is expected to ship in Europe and Asia in late 2014, and reach the US no later than early 2015.