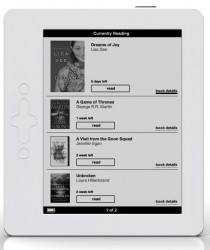 The American Library Association just held their annual conference these past few days, and 3M were there to show off their new 3M Cloud Library.

Update: 3M sent me the wrong image. That is still the txtr Reader, not the new 3M Reader.

There were a number of details that I’d been waiting on ever since the Cloud Library was announced, but the most important one was the new 3M ebook reader.  The image at right shows their current design. That is the concept, but I’m told it might not look quite like that when released.

I hope you recognize it. That used to be known as the txtr Reader. Yep, it’s the one that I reported dead back in December.

3M invested in txtr last year, so this makes a fair amount of sense. 3M saved the expense of developing a new device and txtr recouped the cost of developing a device that couldn’t be sold on the retail market.

But the most important detail on the txtr Reader is that the design is 2 years. Compared to the current market, it is both underpowered and overpriced.And now 3M will be selling it to a small niche. They will have to take a loss or charge far more than the thing is worth.

P.S. I’m also told that txtr are still having trouble with it, but I can’t confirm that.

I’m guessing it’s a placeholder on the Powerpoint slides.

Their business model means they have to cut cost to the bone on the hardware and lock down storage access so the thing might not even have USB.
Or maybe it will but they’ll ditch the wifi and tie it to a Library-only app.

I hope they keep the swipe pad. that is one of the things I thought that made it stand out. The interface worked very quickly with it. It will most likely retain usb because they are also going to have kiosks in the libraries for checking out ebooks.

or they could use something more proprietary for a connector so you’ll probably be able to "dock" the new reader on the kiosk to check out the book onto the reader.

unless they do that wirelessly . but wireless could get too complicated. turn wirless on…. connect to kiosk….. transfer book … disconnect from kiosk…. turn off wireless

3M reader concept looks familiar, begs you not to judge an ebook by its cover | Gizmos commented on The Digital Reader:

[…] point with 3M before posting because I didn’t want to repeat the mistake I made last time (mistake, correction). The device at right is not yet the final 3M […]