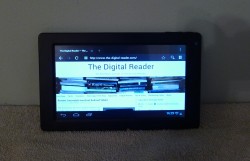 E-Fun’s latest Android tablet hit store shelves this weekend just in time for a sale. BigLots had it advertised for $90, a slight discount from their regular price of $99.

You know I cannot resist a budget tablet so I went out and got this one. Of the many budget Android tablets currently on the market, this is not the one you should buy.

I’ve had this tablet for a week and I can say from first hand experience that it has several issues that should give you pause. While they’re not major defects, they do cause this tablet to come up short against the Polaroid PMID701, IdolPad, or the Innosoul.

The Next7s has a 7″ capacitive touchscreen with 4 GB Flash storage, a so-so camera, g-sensor, and a speaker. It’s running the latest generation of Android on a 1GHz Rockchip CPU.

This tablet marks a new trend for E-fun. Before they had been trying to sell premium budget tablets with a nicer metal shell, better build quality, and a nice finish on the front. The Next7s gives up all this in pursuit of a lower price. The case is now plastic, with a build quality on par with other budget tablets.

First things first. This tablet didn’t come with Android Market and my usual easy method for installing it didn’t quite work correctly. I then tried another easy method and that didn’t work either. To be more exact, the app crashes when I try to run it.

I’m citing this as a shortcoming because the other 3 budget 7″ Android tablets above all either ship with it or you can install Android Market with minimal effort. I see that as a point in their favor. I will of course look for other methods.

The Next7s was announced at the beginning of May as E-Fun’s first cheapest tablet running Android 4.0. At the time I knew most of the specs but I didn’t know that the camera could only do VGA resolution, and rather poorly at that. This photo is the best I could find out of a couple dozen test shots.

This tablet ships with most of the basic apps but it’s missing Youtube, Amazon Appstore, and a decent reading app. It comes with the B&N ebookstore installed but the reading app is provided by E-Fun. Unless you happen to like your ebooks to have a faux book appearance, avoid this app.

The missing apps aren’t a serious problem. I got Aldiko and Youtube apps from Freeware Lovers. They installed fine and both worked fine. The clips I played on Youtube all worked, and I’m currently reading a couple ebooks with Aldiko. Angry Birds also installed okay, but I’m having some issues with lag. It doesn’t always notice when I pull back on the slingshot.

I’ve used this tablet for a week while I spent most of my time working at home. That falls into a moderate use category, IMO, and so far this tablet looks to have not much over a day of real battery life. That is far shorter than the 3 tablets listed above, making it a reason why you should get them.

Angry Birds also revealed an issue that started to bother me more and more as I used this tablet. The touchscreen is capacitive but it doesn’t really like responding to 2-fingered gestures like pinch-zoom.  As a result I’m growing less and less happy with the responsiveness of the touchscreen. Also, the calibration routine doesn’t want to work; I often have to repeat it 3 or more times before it accepts the results.

I don’t expect much from a $99 Android tablet, but this one still manages to come up short. While it does achieve the low end of adequate,  I cannot help but note that there are better options in the same price range.

Of the many budget Android tablets currently on the market, this is not the one you should buy.

I’m short on time today, but I wanted to get out a brief review of this tablet. There aren’t any other reviews posted (not that I’ve found anyway), and I’d like to offer a first hand view of this device so you can better make your buying decision.

I’ve had this tablet for a week and I can say from first hand experience that it has several issues that should give you pause. While they’re not major defects, they do cause this tablet to come up short against the Polaroid PMID701, IdolPad, or the Innosoul.

[…] covered a fair number of details about this tablet in a first impressions post, so I won’t repeat them here. I’m just going to discuss the 2 issues I’ve found. […]

[…] There’s a problem with the battery. I’ve now been using this tablet for over a week now, and my battery usually lasts less than 24 hours on standby. That’s not good. It is far below what you can expect from the average budget Android tablet, but it is also about on par with E-Fun’s recently released 7″ android tablet, the Next 7SE. […]

This is the first tablet I’ve tried and I was both pleasantly surprised and disappointed for different reasons than Nate Hoffelder. We agree that while the quality could be better for the price it wasn’t all that bad. I could see how important quality could be for people in the field taking inventory or doing quality inspections but it wasn’t for me.

I was pleased that I could turn-off automatic connections to Google but disappointed that I couldn’t install apps without going to Google or Amazon. I haven’t decided if I want connectivity on my tablet and I know I don’t want to store details of my personal life on the cloud.

I did notice the pinch-zoom wasn’t as responsive as I’ve seen on others, the calibration needed to be repeated, and the camera wasn’t the best. In fact, I don’t see myself using the camera so I put a piece of mole-skin over the lens.

Also, I was fooling around I confused the calibration of the g-sensor so it responded as if my tab was turned about 185 – 190 degrees clockwise. To remedy this I had to guess where the menu items were and get down to the item "reset to manufacturer defaults" (or something like that). The remedy was doable and the Customer Service person did explain what had to be done, but it would have been easier if there was a special reset button like the one to reset a frozen tab or easier to get to on the touch screen.

Thank you for your inquiry. Unfortunately cracked screens are not covered
under the warranty. We do not have replacement screens as a part for sale .
We will not be able to replace your unit. All replacement are done under
warranty only. We will not accept payment for replacement of any unit.
We are sorry for any inconvenience caused to you. We suggest that
you contact the store from where you purchased the unit from or a
local computer repairs shop for assistance with this issue.

I have a Curtis Klü LT7052 tablet I found at Menards, and the E-Book icon is the same as this Nextbook Next7 tablet.

The Klü eBook app does have the faux book theme like the Next7, but you can scale the page to full screen and get rid of the faux book look. There is still the page curl when you swipe to turn the page though.

I’m not sure if the Next7 E-book app has these same features as the Klü, but it’s worth noting at least.

Purchased the Nextbook Premium 7″ for my son but has had trouble with freezing or locking up often. Called tech support but only told to turn off and on which we did and close up apps not being used which he had closed out completely after attempting to use. Good price choice but you get what you pay for.

I have a NextBook Premium 9 we bought for my parents. The worse tablet to set up. Language came in Cinnese and couldn’t overide it. Took 2 months to coordinate with the tech support, because they kept calling me when I wasn’t home even thought we coordinated a time to fix the issue. These people have no buisiness making tablets. They are about 5 years behind the time. Buy a I-Pad lot easier to set up. I repeat the tech support at Nextbook is the worse, run away from this product and run fast.

Buy NextBook but i dont no How to Add new Apps

Be sure you gèt a Nextbook with Googleplay or you will really be dissappointed.

Why cant load netflix move on my nextbook

Wat ever I bought it and it works fine most app should be got on four shared so it works good. Liarrrrrrrrrrr

Can someone please provide me with the tech support number?? Mine is stuck on the calibration screen and I can’t get past it.

It appears that I am the only one who never has problems with this tablet. But I guess it really depends on what you like. I personally enjoy Google Play over the Android store. But you should not rate this on lack of Android apps. Because the biggest thing on the box is GOOGLE PLAY!
Overall, if you are good with Computers, you will not have any problems.

You have a different model from the one I reviewed.

Hi, could you tell me please, is it possible to charge the tablet with a portable power charger via the micro usb port?
thanks

I plugged in my nextbook to be charged but it has this signal as though it is down loading for the last 3or more hours it wont lock of and I just cant access the screen or anything, what is the problem. I am trying to teach myself to use it but it is not responding. Is there a site Ican log on to to assist me pleas.

please suggest a site for learning about the nextbook

I would also like a site to learn about the nextbook

I got the nextbook 7 at biglots i had it for a couple of months then it would only turn on as far as the next book screen, and it wouldnt go past that screen, called the company the said to check the connect to the charger, i did they sent me a new charger and it still didnt work so i had to send them my tablet. and again its doing the same thing, i will never get one of this type again. with it keep acting up like this and i used mine almost every day. very upset. contacted the company not sure if this one is covered by the warrant