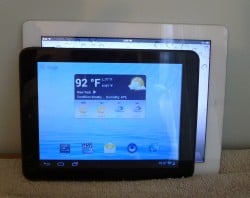 There is a glut of 7″ and 10″ tablets on the market, but only handful of 8″ Android. I have one of the latest.

The Next 8SE is a recently launched budget tablet running Android 4.0 on a 1GHz CPU. The one in front of me is a loaner from E-Fun, but if you look online you should be able to find to selling for around $170.

It’s a slim grey-brown basic tablet with a minimum of ports, 1 speaker, and a VGA webcam. It also has a microphone, 4GB Flash storage, a microSD card slot, and a g-sensor. The speaker is on one end of the tablet, and the ports, slots, and the webcam are all clustered on the other end. 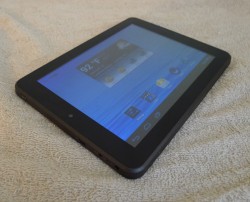 The general build quality is good, and the capacitive touchscreen works well. But I’m not so happy about what I see on the screen. This tablet has a screen resolution of 800×600, making it only slightly less sharp than the 800×480 7″ screens I’m used to.

But that’s not what it looks like. All the icons and menus look bigger than I expect. It feels like they’re displaying on a lower resolution screen. I’ve confirmed the specs so I know it’s impossible, but this screen does look funny to me. 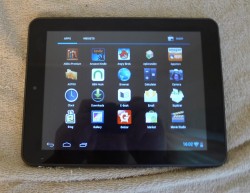 It ships with the Nook Android app and E-Fun’s own reading app (yech) as well as the usual web browser, file manager, media apps, camera, and GetJar. It also has a second web browser, Net Nanny, which is supposed to offer a safe browsing experience.

I’ve installed Angry Birds, and I’m generally pleased with the performance. The speed and responsiveness of the tablet is pretty good, and it’s definitely better than  past Android tablets I’ve tried.

Netflix also installed, but I cannot get anything to play.  I also tried to install Google Reader, but oddly enough it would not download from the Android Market. I’m not sure if that’s the fault of this tablet or the hack I used to install Android Market.

On a related note, I’m somewhat concerned about the numerous freezes I’ve seen.  This tablet has frozen while I was trying to open the web browser, Android Market, reading apps, and a screenshot app.  This is a problem I kept having throughout the week that I tested it. That’s not a good thing, needless to say. 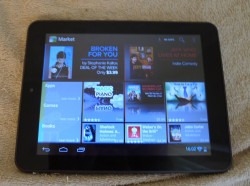 I installed Android Marketplace by following the usual instructions.  They worked, and I now have the Kindle and Aldiko apps installed and working. That’s great news, because I cannot get the Amazon Appstore to register. The app is installed and it runs. But I cannot log in.

This tablet ships with a couple basic apps. they work well, but not spectacularly. I test with a couple AVI files from my collection, and both played just fine without skips, screen artifacts, or losing the sync between audio and video.

The sound quality is pretty much what you’d expect from a budget tablet. It’s not going to please an audiophile but it will let you listen to a song or watch a movie. The speaker is rather quiet, so you might want to use headphones.

There’s a problem with the battery. I’ve now been using this tablet for over a week now, and my battery usually lasts less than 24 hours on standby. That’s not good. It is far below what you can expect from the average budget Android tablet, but it is also about on par with E-Fun’s recently released 7″ android tablet, the Next 7SE. 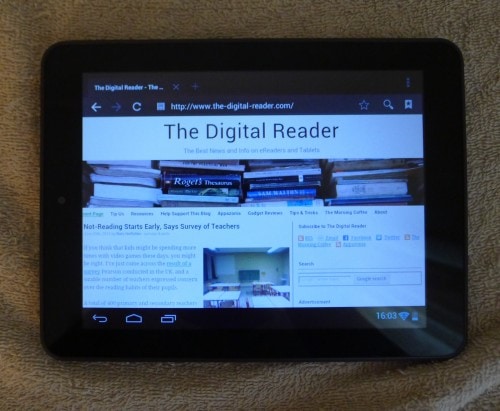 I have to say that I have mixed feelings for this tablet.

Eight inch tablets are the odd little beast of the current Android tablet market.  That makes me wonder what they offer, which is why I accepted E-Fun’s loan of this tablet. Now that I’ve played with this one for a bit, I now know that this screen size doesn’t really offer much.

It’s not as pocketable as the 7″ tablets (yes I do put them in my pocket) nor is it as large as the 10″ tablets – even though it costs the same as some of the 10″ tablets I’ve looked at. What’s more, those 10″ tablets usually offer more ports as well as the larger screen. If I have to go with a tablet less portable than a 7″ model, I think it best to get the biggest I can. 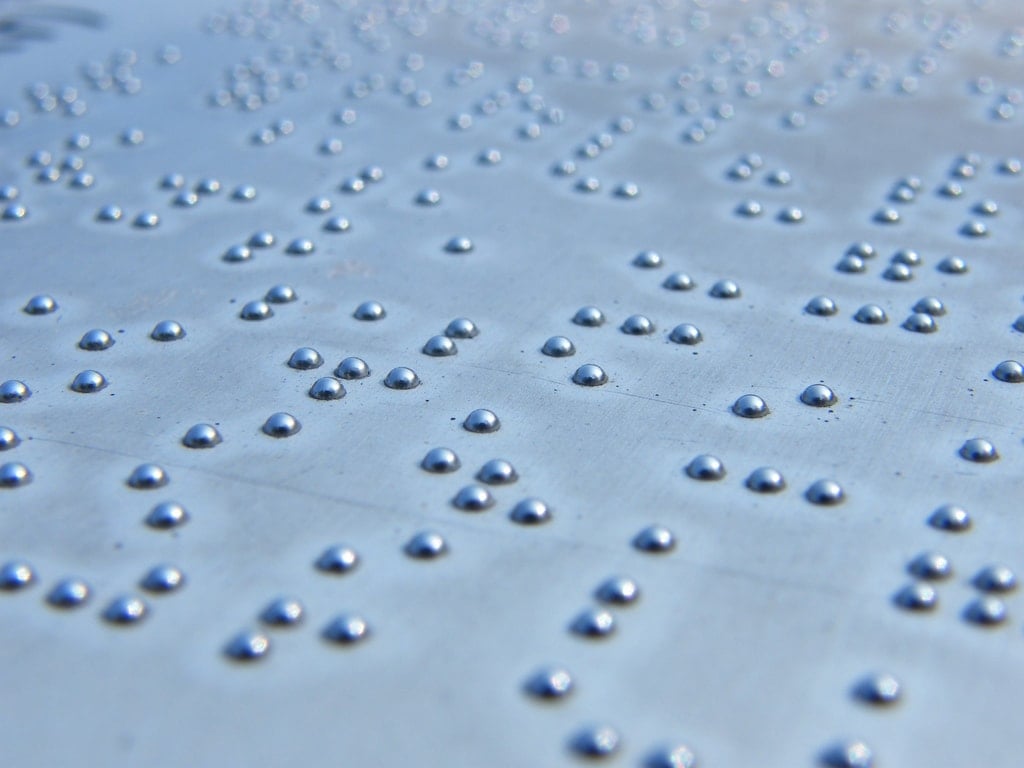 The 8″ 800×600 form factor has a distinct advantage over the 7″ 800×480 form factor for comics and manga. The 4:3 ratio means the average page covers more of the screen, while the 600 wide pixel count seems to be the threshold for good legibility in manga text. While I have read innumerable manga on 800×480 screens, small print (like in Negima) tends to become illegible without zooming.
As a result, a 800×600 8″ tablet with a middling (Cortex A8) processor, microSD slot and the Perfect Viewer app is a near perfect budget manga/comics viewer. Especially when quite a few A10 based Shenzen 8″ tablets are in the $129 range. (quite a few of these are 1024×768!)

That’s a good argument for the screen ratio, but doesn’t it also apply to screens like the iPad? The ratio is the same.

You have to pay a hefty premium for a 4×3 screen, i guess. The other specs for this are the same as a $90 Polaroid, so you’re paying almost twice as much for 25 percent more screen space.

I have Nextbook 8se Netnanny is blocking everything. how do i remove this. I am 59 and dont need it.

Go to settings then apps then find netnanny then tap it then uninstall.

Really painfull to use. Freezes at times for no apparant reason and there are intermittant dead spots on the virtual keyboard. Also only 2 country choices to regiyster product for support usa canada….really????!!!!!

Have not been able to use nextbook Premium 8 yet.
Most difficult to negotiate
. Can anyone helpAlso not able to regiater Australia does not appear in countries

I just want to know how to Screen Shot..?

Press and hold the home button and power button.

O have been waiting on my netbook volume button broke sent it in during Marchand now its July when I call they tell me "Waiting on customs" been hearing that since May.

Have had 3 Nextbook 8SE and as I only read books, I have been reasonably happy with the reader. Unfortunately, the battery life on 2 of them sucked. Also very little info on how to transfer books from the SD card to the Bookshelf. Emails to the Nextbook website were really useless as none of the 3 replies actually answered the simple question ? A basic minimalistic tablet that does the very basic stuff at a cheap price. (and why would I use a book reader to take photos – what is it with you guys and your toys ?)

I have a nextbook 8 se and I’m having a problem with the battery icon, it says my tablet is 100% charged when is really not. I only had this tablet for 2 months now. Is anyone having this same problem? What is wrong with my tablet? Thanks in advance.PS in order for the icon to get back to normal I had to let it die completely, the battery still longs 4 to 5 hours but is really annoying not to be able to see what’s the battery percentage.

I think you have a defective battery. It could also be the charging circuit.

You can try a factory reset of the tablet; that might help.

We haven’t had our Nextbook 8 SE for very long and it won’t turn on at all now. I can’t get it to charge. I have had to reset it once already. Really makes me mad.

Love it one bug mic locked open that need to kick shit out of the softwear write er ….. 4.5 hr battery time games play grate up date your ui fix most bugs you guys have

I have nextbook tablet and preinstaslled Net Nanny browser poups all the time. I’m an adult and I don’t need this. However I could not uninstall this. In settings for this application all buttons are disabled even Uninstall button. Any ideas is it possible to remove this application?

Apparently one of the ways they keep NetNanny from being deleted is to give the app control of your Android as system admin. According to the FAQ, the first step is to remove NetNanny as a system administrator before trying to delete the app.

Let me know if this works; if it doesn’t I will hunt down another solution.