Freescale Wants to Know Who is YOUR Smart Mobile Device Pundit 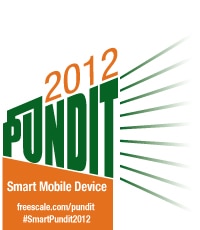 For the past couple years now Freescale  has been naming a list of Smart Mobile Device Pundits. This is an awkward name for  group of bloggers and journalists are considered the most influential in tech and gadgets.

While it’s not the best name, the 2011 list is filled with  bunch of smart people, including me, David Pogue, New York Times, James Kendrick, ZDNet, Walt Mossberg, All Things Digital, Warner Crocker, GottaBeMobile, Brad Linder, Liliputing, and many more.

Freescale is putting together a new list of pundits for 2012, and  few days go they asked for nominations.  They’ll accept nominations until 24 January, and shortly after that they’ll open up the voting on Facebook. (Yes, it is  popularity contest.)

Please go nominate me, and thanks.

But don’t be surprised if I do not win. This time around Freescale is only going to pick 5 Pundits, not the 20 that they had last year. I’m good, but TBH there are at least 5 pundits that even _I_ would pick over me. While I don’t expect to be named one of the pundits, I will do my best to win.

Apple Now Rejecting eBooks Because of Links to Amazon

FYI: None of the links you provides work.

Thank you. But typing in "Nate the Great" gave me a giggle that has yet to go away. I passed it twice on the list looking for Nate Hoffelder.

Hope you win a spot. In my mind you deserve it. You put a lot of effort in keeping your readership well informed.

Eh. I nominated you. But you can forget a vote if I have to log into damned Facebook for that.

I tried to nominate you but it wouldn’t accept my gmail address, so I tried my att.net address and then was successful.