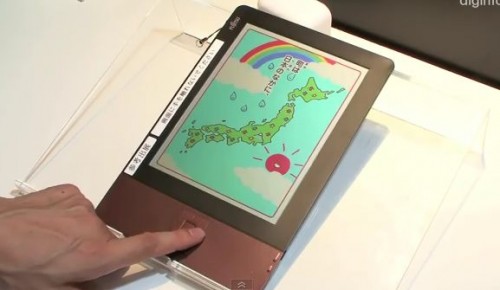 Fujitsu showed off their latest LCD screen at the International Digital Publishing Expo this week.

The demo unit was based on an 8″ screen which used the cholesteric LCD technology that Fujitsu has been working on for the past 5 or so years. While it has the same color selection as the earlier models, it is noticeably faster than the previous generation FLEPia screen. Screen refresh is around 7 tenths of a second, which is almost twice as fast as before.

It’s running on Linux, not the Windows CE that the FLEPia commercial models offered. This demo is also thinner and lighter than the commercial models, but there’s no word yet on when you can expect the device to be on shelves or what it will cost.

The Nook Touch in the Great Beyond