Fun With Statistics: More People Browse the Web from an iPad 2 Than From Samsung Tablets

Apple is holding a big event today to show off their latest iPad and other gadgets, but if you want to know why they are selling more tablets than anyone else you might want to look elsewhere.

The analytics firm Localytics posted the stub of a report on their blog yesterday. This report looked at tablet market share for Android and the iPad and it revealed that more iPad 2 are showed up in Localytics survey group than the iPad 3 and ipad 4 combined. A full 38% of the iPads identified in this survey were iPads 2, with the iPad 3 and iPad 4 accounting for 19% and 18%, respectively.

Thia data comes from a month-long study of the analytics data received by Localytics more than 1 billion devices, 20,000 apps and 5,000 customers. It might not be a perfect snapshot of the market but it does remind us that the buying public doesn’t share the tech blogosphere’s obsession with the latest and greatest.

I was initially surprised when I saw this chart but then I remembered that Apple has been selling the iPad 2 since March 2011. They relaunched it with a $399 price tag in 2012 but they never stopped making it. If the above graphic is accurate then the iPad 2 is Apple’s best selling tablet.

Here’s a mind-blowing factoid: Apple is dominating the tablet market not by releasing new cutting edge tablets every year but by continuing to sell a 2 and a half year old model.

As a result this radically changes all of our assumptions about Apple’s strategy for success. Rather than simply have the niftiest hardware, Apple instead draws people in with the coolest hardware and then lets cheapskates buy the iPad 2. With that in mind I’m not sure that it matters what Apple announces today; so long as they go on selling the iPad 2 they will still come out ahead.

In other news today Chitaka has released a new quarterly survey for their ad network. They tracked millions of devices, collated the data, and concluded that the iPad still accounts for over 80% of web traffic in North America. 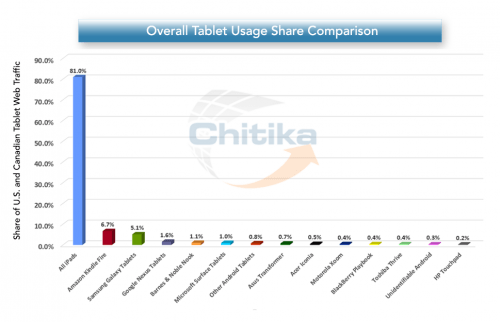 If you cross the Chitaka graph with the Localytics chart then you end up with iPad 2 generating more ad impressions than the Kindle Fire  or Samsung’s tablets.

Is that actually the case? I don’t know, but it does make a certain amount of sense.

which is exactly what they did today

So they’re still selling the iPad 2. "Cheapskates" who buy an iPad 2 today for $399 should officially count as pretty dumb, since by last year’s standards, the iPad 2 is a pretty lousy tablet. Low display resolution, not that much RAM, no great CPU. Surprisingly though, the iPad mini actually got upgraded with a high-resolution display and a much better processor, it seems. This makes make look forward to upcoming clones without the iLockin.

What I find interesting is the dropping of the weight of the iPad Air to 1 lb. That’s really light! In fact the iPad mini retina display gains some weight which might make the original iPad mini still a bit popular.

Apple has always used commoditized hardware as part of its strategy.
The key is to spot the seminal moment and for IOS it’s the new 64 bit CPU and OS.
And Apple is profitable enough to encourage hardware sales with platform wide free apps and a free OSX upgrade.
Users of the old architecture will start feeling the pressure of obsolescence.
BTW, Apple has not lowered prices for the IOS storage. That’s where they’re clawing back some of the margins lost elsewhere.

Is it that people are buying the iPad 2 now, or is that they can’t be bothered to update the iPad 2 they bought before the iPad 3 came out? I guess you’d have to look at sales data to figure that out.

Apple sold more iPads in either of the past 2 years than they did in the year before, which suggests that all these iPads 2 couldn’t have sold in 2011 alone. If that were the case they would not have the single largest share.

[…] quietly retired their best selling tablet today, and they replaced it with a slightly newer […]