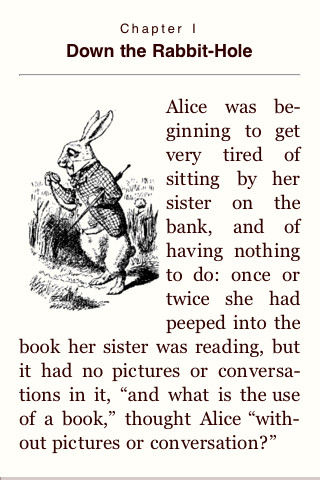 Stanza, one of the best e-reading apps around, was brokenwhen Apple upgraded to iOS 5.

Amid the uproar from the app’s users, Stanza’s overlords at Amazon tweaked the ePub-capable app but did not promise future upgrades.

Update: User reports are coming in that Stanza is no longer usable. Caveat Emptor.

But Stanza runs fine under iOS 6, the new operating system for iPhones, iPads and iPod Touches, at least as best I can determine. I did suffer a lockup when I tried to change fonts, but my hunch is that this is probably an iOS 6 issue rather than a Stanza-specific one. A reboot of my iPad did the trick. Let me know if you yourself experience glitches. I’ve installed a zillion apps on my iPad, more than a few running simultaneously, and perhaps that can make things weird at times. I can hardly wait to test Stanza on the iPad Mini, assuming I buy one.

Just remember to store dupes of your books with Dropbox or another cloud-based system or the equivalent in case Stanza ends up broken in the future without a fix. Also, Stanza won’t work with “protected” books, not even Amazon-DRMed titles. Jeff Bezos and friends apparently ditched Stanza to stay focused on the standard Kindle apps, which, by comparison, come across as hobbled.

Why Stanza’s cool: It includes the highly readable Arial Rounded MT Bold font among others. Stanza is endlessly customizable, and on the whole I like the interface, which lets you use Apple’s pinch feature to expand or shrink the size of the font (after which you do a quick “save”). For tech-smart library patrons who want to read nonDRMed e-books, Stanza could be an excellent recommendation as long as they understand its limits. There are somewhat similar substitutes such as Megareader, but Stanza’s still a contender, even a few years after Amazon froze its development.

Stanza on iOS 6 loks up when you try to access Settings – General or Settings – Layout from inside a book, and when accessing Info – Settings from the main screen. That’s on iPhone 4.

I’d call that running "bearable" rather than "fine".

I just discovered only general and layout buttons in settings cause it to crash on my iPad. Personally I can live without those 🙂 Still a great app.

Just noticed that’s what you said in your post, but in other words.

It is not even bearable. It is worthy of publishing a correction to this article, reversing its conclusion. If you can’t access Settings even one time to change something, this app is dead.

If I needed to replace Stanza, I’d probably switch to the paid version of ShuBook ($1.99), which is under active development and has many of the features of Stanza.

How can I transfer the ebooks i have in Stanza to my Kindle OS app ? Thanks for helping me.

I am a Stanza user not a Kindle so with that in mind : can you load to the Kindle app through email?? If so; simply share each book from the stanza app by emailing to yourself at your KINDLE email address then loading into the Kindle app. I hope this helps …

Hi there, so if I can’t even access settings in stanza cos it locks up every time, does that mean my stanza on iPad mini is dead???
Help:)

To replace the late, lamented Stanza, check out an app called Marvin. Lots of features, and may even be better than Stanza in some aspects. Far superior to the paid version of ShuBooks, and FREE.

Although I’m unfamiliar with Marvin, there is an oft-visited thread on Mobileread here:
http://www.mobileread.com/forums/showthread.php?t=198617
It seems to be very popular.

I agree, Paul—Marvin is in fact superior to Stanza in various ways.

These days, however, I more often use Voice Dream because of the mix of annotation capabilities, a very readable sans serif font, and outstanding TTS (wonderful while I’m walking or on my treadmill). See my review at http://librarycity.org/?p=7653.

As for Stanza itself, yes, it’s indeed broken—a fact that became obvious when I received feedback and finally got around to trying new settings. My old ones were working great.

Shame on Amazon and Jeff Bezos. I loved Stanza and hope that the Washington Post, Bezos’s personal acquisition, will enjoy a better fate (no definite answer to that one, right now, even though I see some positives).