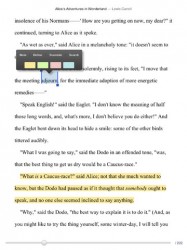 Google rolled out an update for their reading app for the iPad and iPhone yesterday, giving the app a couple sweet features that Android users have had since last year.

Readers can now select a place name in the book they’re reading and (with luck) see a description and a map of the place. The data for the entry is drawn from Google Maps (as well as Google’s other data sources like Frommers). Unfortunately this feature does not seem to work all that well; I tried it in several ebooks and wasn’t given a location option. Or perhaps it requires a more specific location than simply a place name – a city and province, for example.

But never mind that; the other new features make up for its absence. Google’s iOS app now supports fixed layout ebooks, meaning you can now use the app to read digital comics, children’s books, and other rich content. The app now also supports vertical text which is required for Japanese, Chinese and Korean text. Japanese ebooks in particular will benefit from this; there are a number of genres where the consumer expects to see vertical text.

The ToneFone iPhone Case Turns Texting into a Workout

"Check on adobe digital editions" they say, and what about fixed layout or audio and video which ade doesn’t support?

Google should definitely stop behaving like the biggest amateur in the industry and care a little bit about publishers and developers by facilitating their job. But no, they just give them the middle finger.

In some European countries, publishers are so frustrated about this situation that they don’t sell their books in google play — which is run by a wild bunch of glowns — anymore. Until google gets serious about ebooks.

Could you please tell them they’d better stop being astro-dickheads? It seems to me they are more likely to hear from journalists and bloggers than from people they are supposed to partner with…