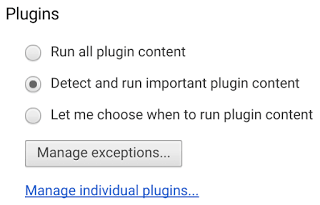 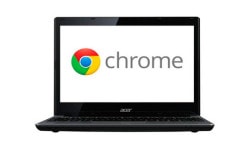 Google has yet to address the problem of Chrome being a memory hog but today they did something about the Chrome battery problem that has been plaguing users for the past year.

The ad network is rolling out a new version of Chrome today which adds the option of pausing Flash and other content. This feature is coming to the desktop Beta channel starting today, and it will shortly be rolling out to all Chrome users on Windows and OSX.

Once you have the update, browse any webpage with a Flash script and Chrome will pause any content which isn’t a key part of the webpage while letting other Flash animation (like a Youtube video) continue to play. If Chrome accidentally pauses something you were watching, you can just click it to  reactivate it and continue playback.

Google says that the new feature is optional. You can go into settings and set the priority:

They also say that this feature is going to significantly reduce battery drain, but I’m not so sure that is true (or rather, it’s not going to help me any).

Even though I use Ghostery to (among many other uses)  prevent Flash from running uninvited, Chrome is doing terrible things to my battery life. I’ve tested it on several occasions and Chrome has cut my battery life by up to a third.

Given that I am usually plugged in somewhere, this is not a serious issue. But I would appreciate it if Chrome would let me have the battery life which Dell promised when I bought this laptop.

And that might happen later this year. Today’s new Chrome feature isn’t going to help me, but Google is also hinting that they will announcing more Chrome battery fixes over the coming months. With luck, one of those fixes should help.

The memory and battery problems are linked. RAM is using plenty of power and even OSes are optimized for perf not power when it comes to RAM usage.
DRAM is one of the worst things when it comes to hardware.
The memory interface on the SoC is using a lot of die area and is power hungry, the amount of RAM we use nowadays is crazy high and uses a lot of power while also costing a lot. The more portable the form factor, the worse it gets. In phones you have phones with low and midrange SoCs with so much RAM that it costs more than the SoC and power is pretty crazy too because they can’t even afford to use costlier and more efficient RAM. In IoT the cost of RAM is a huge problem, in server the power consumption is insane.
So there is an acute need for big changes. For now a transition to stacked dies with TSV is likely. In GPUs the move towards HBM starts this month (AMD Fury), in server and likely PC HMC appears to be the fav and in mobile maybe Wide IO 3 (a 1 year old table coparing the 3 standards http://blogs.synopsys.com/committedtomemory/files/2014/05/DRAMs.jpg )
Later ReRAM and other new types of RAM should show up.
There are also things like Marvell’s FLC that could become reality soon.
http://www.marvell.com/architecture/flc/
37 mins presentation on FLC https://www.youtube.com/watch?v=NSdRK8sPTjQ

So the problem is far bigger than just apps, the OS can and should do more while the hardware needs a revolution.