When Great Ideas Arrive Before Their Time

Wired published an article today which looks at some of the biggest flops of the late 1990s tech bubble and points out how some of the ideas weren’t bad so much as they were too tried before the market was ready or before the tech existed to make the idea practical.

This article caught my eye because ebooks went through a similar cycle, only over a much shorter period of time:

But the bust was so big and so widespread, there are so many deliciously ideal symbols for this dark time in the history of the internet, a period when irrational exuberance trumped sound business decisions. Fifteen years on, people—particularly people in Silicon Valley—still talk about these epic failures. In addition to Pets.com, there was WebVan, Kozmo.com, and Flooz.

The irony is that nowadays, they’re all very good ideas.

Now that the internet has become a much bigger part of our lives, now that we have mobile phones that make using the net so much easier, now that the Googles and the Amazons have built the digital infrastructure needed to support online services on a massive scale, now that a new breed of coding tools has made it easier for people to turn their business plans into reality, now that Amazon and others have streamlined the shipping infrastructure needed to inexpensively get stuff to your door, now that we’ve shed at least some of that irrational exuberance, the world is ready to cash in on the worst ideas of the ’90s.

If you’ve involved with ebooks long enough then you probably know that ebooks went through a similar bubble in 1999- 2001. I wasn’t into ebooks then, but I have researched the period and it had all the hallmarks of a bubble. With everyone and their cousin launching ebook startups, publishers launching digital divisions, and retailers opening ebookstores, the hype exceeded reality.

A bunch of ebook ideas were tried in that era which fizzled at the time but are now considered industry SOP. Time Warner Books, for example, launcheda idigital division. B&N partnered first with Nuvomedia in 1999 to sell the Rocketbook and then partnered with MS in 2000 to sell MSReader format (before getting out of ebooks in 2003). Adobe got into trade ebooks via their PDF format, and Palm partnered with Peanut Press to add ebooks to Palm PDAs.

But in spite of the high hopes, it was clear that the ebook bubble had burst when AOL Time Warner (remember that monstrosity?) shut down iPublish.com in December 2001.

There simply wasn’t a market for ebooks yet nor were mobile devices mature enough to make good ereading devices, but on the upside a few key components came out of the ebook bubble which laid the groundwork for the success of the Kindle when it launched in 2007. 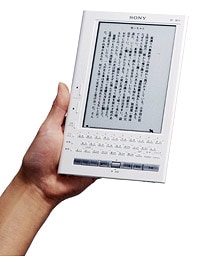 Amazon first started selling ebooks in 2000, and around that time Mobipocket launched in France. And even though the ebook market was negligible, there were hardccore fans buying ebooks in 2002-2006 to keep some publishers interested. And while Sony’s ereader efforts (including the launch of the Librie in Japan in 2004) amounted to diddly, the attention they drew to ebooks kept the market sputtering along.

In short, the modern ebook era couldn’t have existed without that earlier ebook bubble. As Wired put it:

The lesson here is that innovation is built on the shoulders of failure, and sometimes, the line between the world’s biggest success and the world’s biggest flop is a matter of timing or logistics or tools or infrastructure or luck, or—and here’s the lesson that today’s high flying startups should take to heart—scope of ambition.

And that’s true not just in tech but in most industries. The railroads, for example, went through a bubble in the late 1800s which laid the groundwork for themassive rail systems we have today.

B&N’s Nook servers are down

Yes. And there was also the Sony Data Discman, Voyager Expanded Books, and the text files from Project Gutenberg.

I was aware of them, but I couldn’t find a good place to mention them in this post.

Ahhhhh. I used by Rocket eBook for years, until the battery died. A year after that I bought a Sony Reader.