HarperCollins Wipes Israel Off the Map 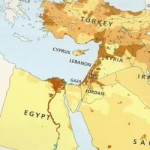 HarperCollins is in trouble today over a new edition of a school atlas which omits the state of Israel.

The Catholic news weekly The Tablet reports (and The Telegraph confirms):

The Bishops’ Conference of England and Wales has accused the publisher HarperCollins of harming peace efforts in the Middle East through its production of atlases that omit Israel from their maps. Collins Middle East Atlases, which are sold to English-speaking schools in the Muslim-majority Gulf, depict Jordan and Syria extending all the way to the Mediterranean Sea.

Collins Bartholomew, the subsidiary of HarperCollins that specialises in maps, toldThe Tablet that including Israel would have been “unacceptable” to their customers in the Gulf and the amendment incorporated “local preferences”.

That report isn’t completely accurate but it is for the most part true. Syria isn’t shown as extending to the Mediterranean; Lebanon is marked on the map.

But Israel isn’t labeled, which you can more clearly see in this larger image (originally posted by The Telegraph): 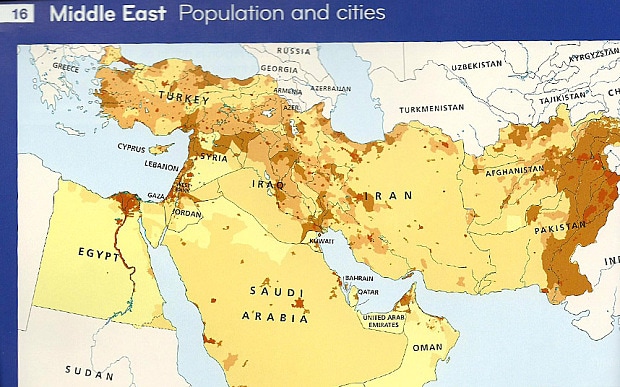 And HarperCollins is getting grief.

Please don’t take my calm coverage of this story as excusing HarperCollins; I don’t think they should have acquiesced to customer demands, but that doesn’t change the fact that the instigators here are the local governments and local schools.

I blame the schools more than HC for the simple fact that the schools are supposed to be educating the students and providing the best info available. But instead of showing an accurate atlas, the schools used a politically acceptable atlas.

That is just as wrong when it occurs in schools in Asia as it is when it happens here in the US. And similar censorship as well as political infighting over what goes into a textbook does happen here a lot, not all of which makes it into the news. In the US the contentious issues don’t include Israel but do include sex ed, creationism in science textbooks, climate change, and other topics.

In our own way, some school districts in the US are just as guilty of failing to educate students as those middle eastern schools are (another reason why I don’t feel I can yell and scream about this topic).

"In the US the contentious issues don’t include Israel but do include sex ed, creationism in science textbooks, climate change, and other topics."

Sorry, creationism is not science so it is not censorship.

I’m not quite sure whether you thought that I meant that creationism should or should not be included, but I can see that I need to clarify that paragraph.

It appeared that you were saying it’s censorship. What I meant is that creationism is not science so it isn’t censorship – it can only be censorship if it was possible that it belonged in the science books. It is contentious, just not censorship.

And that’s why I edited the previous sentence.

Well, the biology books my school used in Oklahoma in the 80s didn’t mention evolution at all, so that WAS censorship. I had to learn it on the street, just like sex ed.

Creationism is superior to science, so you are technically correct.

I find it interesting that you are concerned about censorship in the Middle East but not in Texas. Before we complain about other societies whose cultural values are significantly different from ours, we need to clean up our own messes, beginning with the Texas state school board that determines textbook content. Children in the United States will be given a very distorted view of American history and of science in general as a result of the Texas board’s decisions. Unfortunately, the Texas decisions affect children in other states, too. I’d be less concerned if only Texas children were getting a 15th century education, but the scope is broader.

I also find it interesting that the British mimic Americans in believing that their views on freedom are universally held; they aren’t. There is no expectation in most countries of, for example, separating religion from the state, yet we preach as if our values are universal values.

Again, our preaching would be so much more effective if the rest of the world couldn’t point its finger at us and say "clean your own house before criticizing my house".

One, it’s more than just Texas. I didn’t mention any state by name because I didn’t want to seem like I singling them out.

And two, I do feel it’s just as important. That’s why I wrote things like "That is just as wrong when it occurs in schools in Asia as it is when it happens here in the US".