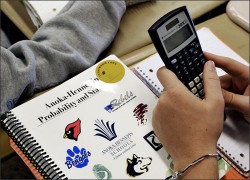 One Minnesota school district balked at paying $200 grand for a new set of statistics textbooks, so a group of teachers came up with an alternative. They wrote their own.

Michael Engelhaupt, a 31 year old math teacher, was one of 3 teachers for the Anoka-Hennepin School District who spent their summer developing this new textbook. The total cost was around $15 thousand,and most of that went to paying the teachers' salaries. Also, about $5,000 was spent providing offline copies of the digital textbook for students who don’t have a consistent internet connection.

In the long run this is going to be primarily online textbook, but for right now a number of the students are using print copies because not all the classrooms have  enough computers. They’ve been using the new textbook since the beginning of the school year, and by most reports the experiment is going well. The students are learning, grades look good, and the teachers are working the bugs out of the curriculum.

The teachers have a long term plan to maintain and update the online textbook, with revisions already planned for several chapters. They also plan to share it with other MN high schools next year.

While writing a textbook looks like an impossible task, they didn’t exactly have their work cut out for them. The teachers didn’t have to write the stats textbook completely from scratch; instead they used an open source textbooks as a source.

There’s a growing movement for open source textbooks here in the US, and  there are a number of different non-profit organizations that collect and distribute them. The CK-12 Foundation (where this textbook came from, originally) offers CC licensed textbooks for a bunchaton of different classes in math, science, and other curricula. Because these textbooks are CC licensed teachers can use them without cost and they can create their own version – one that meets their needs and (most importantly) follows the educational guidelines for their state and school district.

In this case the teachers also added a fair amount of content. I’m told that the chapters on probability were for the most part rewritten by one of the teachers, and the chapters on statistics were drawn from the source CK12’s basic stats and AP stats with some of the teams own work added to fill in the gaps and meet the guidelines.

I would bet that meeting the MN state standards was almost as important to the teachers as saving the money. You see, a lot K-12 textbooks are written to fulfill the requirements of the more populous states – Texas and California, for example. The states with the big markets and the most contentious regulators get the most attention from textbook publishers, and everyone else pretty much has to use what is available.

At least, they did have to use those textbooks in the past; now they can make their own. And that makes me very happy.

I’ve never liked the fact that textbook publishing is an industry. Education is the bridge you cross to get to a better future, and textbook publishers are the toll collectors exacting a fee from all who pass. The simple fact that there is a toll restricts those who pass to only the more affluent students. It’s difficult to succeed without an education, but it’s easy to stay poor. That reinforcing loop of the poor staying poor is not good for society overall.

While I respect a publisher’s desire to make a living, I feel education is too important for it to be subordinated to someone’s profit margin. And that is why I like it when I find someone bypassing the textbook publishers.

That’s nothing new. Texas schools have had all the textbooks they need on line for decades now: http://www.biblegateway.com/resources/ebooks/

Why did you offer a link to a site with Bibles? Those aren’t textbooks.

Nate
Hopefully you are just being cute

Will iBooks Author Actully Reduce the Cost of Producing Textbooks? – The Digital Reader January 23, 2012 um 11:58 am

[…] particular textbook project. Back in December I posted about a trio of high school teachers who wrote their own textbook. They took parts of an existing CC licensed stats textbooks and wrote the parts they needed. They […]

[…] I have written about textbook projects like the one from California or the several teachers who wrote their own high school stats textbook. Both of these are examples of OER.If you’d like to participate, click here to sign up.via […]

What is the replacement cost of a dropped tablet vs a dropped book? Don’t get me wrong as I am all about the move to digital educational products as it is a world I have been in for many years – Pearson, MHE etc but don’t forget about simple things such as support, maintenance and updates.

In situations like schools the warranty is usually bundled into the original contract. Sometimes the schools let the parents buy a warranty against damage. They’re not that expensive.

[…] the requirements of a specific curriculum. For example, all it took for ones school district to craft their own AP Stats textbook was $40,000, much of which went to pay the salaries of the 3 teachers who did the […]