something fun to keep you busy while waiting for the next episode of Game of Thrones.

Whether it’s being flayed alive by the Boltons, strangled with your own small intestines, or stabled in the back by your own men, there are many interesting ways to die in Game of Thrones.

How do you think you’ll die? Vulture has posted a random death generator on their Facebook page to help you find out. It includes many of the less gruesome causes of death from the novels, but after playing with it for a few minutes I think it’s missing a number of the more inventive deaths mentioned in the 5th book. (It’s also missing a couple obvious ones like betrayed by Littlefinger, turned into a wight, or experimented upon by Qyburn.) 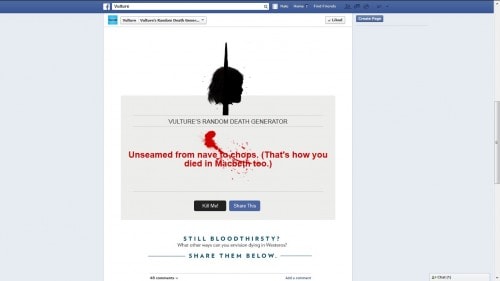 I won’t spoil it for you, but the 5th book spends a fair amount of time following the Boltons. They don’t eat their victims (well, at least  not recently) but they do have some inventive ways to kill people which take a long time.

The Asus Padphone is Not the Wave of the Future