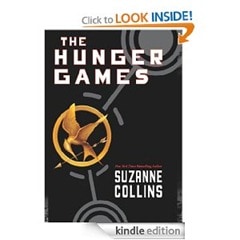 Long-time young-adult literature fans might have been left scratching their heads when Amazon recently announced that the The Hunger Games trilogy had passed Harry Potter as its all-time bestselling young adult series. However, all became clear when Amazon mentioned that the series had been selling like crazy as e-books: for every print version of a Hunger Games book sold, readers bought 3.7 Kindle e-book copies.

Of course, the Hunger Games books have been available electronically for some time, whereas Harry Potter only became available in the past year. And Hunger Games just had a blockbuster movie adaptation to drive interest in the paper books, while my Mom told me that Harry Potter was very much “yesterday’s news” among the kids at the high school from which she retired as librarian this year. But still, I find this a very interesting statistic as it seems Hunger Games sales are considerably more skewed toward e-books than fiction book sales as a whole.

So what does that say about the target audience? Are young readers skewing more and more toward e-books as they have more of a taste for gadgets than older generations? Are they more likely to engage in the impulse-buy of downloading an e-book?

The price of the Kindle editions might be a factor, too: the original book is available for $1.99 for Kindle right now (or $5 in a movie tie-in edition), with the other two books $5.99 each—pretty cheap for traditionally-published bestsellers, and definitely within the price range of kids with allowances to spend. Weirdly, a trilogy edition is available at $18.99 for Kindle, which is more than you’d pay for the original three books if all of them were $5.99!

This also may give the lie to the idea that people aren’t interested in reading anymore. It sure seems like quite a few still are!

Are "Harry Potter" ebook sales even counted towards the total at Amazon? Technically they are sold by Pottermore.

This announcement came from Amazon. To consider:

(a) while having majority marketshare, 60% of ebooks is not high enough to say that only Amazon matters,
(b) they’ve also made misleading claims in the past about ebooks outselling pbooks. They don’t share enough of the facts.
(c) Amazon is far from having a majority when it comes to pbook sells. Walmart was a leader in selling both HP and Hunger Games novels. I have not seen anything for Hunger Games like the way that the huge tables were cleared for HP on release days.
(d) In overall world wide sales there is simply no way that Hunger Games beat the what 400 million copies sold of HP.

I think that these press releases are disingenuous.

I had to buy the hardback copies of Catching Fire & Mockingjay for my son. He didn’t want to read the ebooks. Neither of my boys (11 & 14) like to read on ereaders.

There are a few more reasons why the Hunger Games trilogy is now the all-time best-sellers at Amazon:

* No Harry Potter titles were released as eBooks until the entire series was published and the movies were all released. (J.K. Rowling refused to allow her publishers to release then as eBooks.)

* By making customers go through her Pottermore site in order to purchase eBooks, J. K. Rowling is adding "friction" to every Harry Potter eBook purchase, which may be deterring some buyers. (For example, Amazon’s "1-Click" buying option doesn’t work with Harry Potter eBooks.)