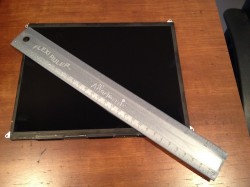 Earlier today MacRumors posted pictures of what they say is the screen that’s going to go on the iPad 3.

They bought it from a Chinese parts warehouse, and if the specs are correct then it has a resolution of 2048×1536, just like the Retina Display that the iPd 3 is rumored to have. But there’s really no way to test the screen and prove it matches the specs.

So is that the screen from the iPad 3?

Update: I’m reversing myself. When I wrote this post, I had forgotten about the iPad 3 parts leak that happened a couple weeks ago. If those were real then so is this. And I now think Apple’s doing it on purpose as part of their marketing plan.

I believe MacRumors when they report the resolution as being 2048×1536. That’s what they were told and they reported it faithfully. But I can also see how they might have been scammed.

Did you catch the Quora thread 6 months back that explained how Apple stays ahead of the competition? Let me summarize it. Apple gets the cutting edge tech first because they also provide at least some of the capital costs to build the factories. Apple gets the exclusive as part of the deal.

Now, if Apple has an exclusive on this new hi-res screen, what are the chances that the screen would show up in a parts warehouse? I’d rate it as somewhere between slim and none. Apple is simply fanatical about preventing leaks. There’s no way that a parts supplier would risk Apple’s displeasure by letting one of these screens out in to the wild.

And yes, MacRumors posted a close up shot of the screen. The photo shows what looks to be some very tightly packed pixels. But will the screen actually work, and will it really show the higher resolution? We cannot know for sure until someone powers it up, and we cannot power it up without the appropriate the drivers and controller chips. So for all we know this could be a scam from some back alley parts maker.

While I do believe that the iPad 3 will have the new higher res screen, I don’t think this particular screen is actually from an iPad 3 production line.

I’m inclined to give MacRumors the benefit of doubt for three reasons:

1. MacRumors is more of an aggregator of rumors generated by other sites, and historically tends to be conservative when throwing its own opinion behind one. It’s an old, well-established site, too, and has a lot of experience weeding out the more improbable rumors. For the site to go this far out on a limb without another source for backing is almost unheard of.

2. Double-resolution (quad-, interference to that in the first few releases) artwork has been creeping into iOS builds for over a year now. This is typical of the way Apple lays groundwork for developers, and 12-18 months lead time on the necessary hardware is about right.

This ties in very neatly with a 9.7″, 2048×1536 IGZO panel Sharp’s known to have been working on. As far as driver ICs to go with the panel, those are straightforward die shrinks of existing QXGA drivers. It’s the limits of LCD panel fabrication that dictate the minimum size of a driver die that can be used. The connection between contact pads on the panel and the corresponding ones on the driver die are made with a conductive adhesive gasket, and the minimum trace size that can be formed on the panel glass dictates the minimum size of the corresponding contact pad on the driver die. And LCD fabrication has a LONG way to go to reach the latest 22 nm processes for silicon dies…

In short, I tend to believe that panel is the genuine article. The timing is right for the delivery of such a display, from a vendor Apple is known to be working with, obtained by an established, "conservative" rumor site not known for wild flights of fancy.

True, but I have trouble believing that security would be lax enough to let a screen slip out into the wild. That’s why I think someone in Chin faked it.

What if Apple won’t be the only one to use the screen?
Apple doesn’t always get exclusivity and Sharp sells its own tablets. It might come from the parallel Sharp supply chain. Or from some other customer. Apple may be the biggest customer for the part but any leftover capacity would sell nicely to smaller vendors.
Odds are it has nothing to do with the Ipad but it is far from impossible.

Pretty sure that is the new iPad 3 screen. It’s identical to the one my friend found laying on the bar at a posh restaurant near the airport. The bigger news is that it had two rear facing cameras and will be first tablet to have 3D HD recording and playback capabilities. The bad news is that the included 3D glasses are as cheaply made as the ear buds.