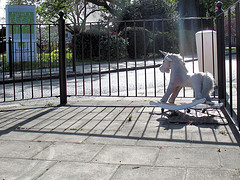 There’s a "me, too" post over on the Pixel Qi blog which is getting a lot of attention right now, but I don’t ever actually expect to see the screen on the market. Mary Lou Jepsen is shocked to learn that the screen on the New iPad is a power hog, but lucky for us Pixel Qi is working on an alternative.

We at Pixel Qi are dedicated to low power screens – our screens are the cornerstone of thinner and lighter devices that will work inside and in direct sunlight. We can now announce that we can match or exceed the image quality of the screen in the iPad3. We have a new architecture that matches the resolution of the ipad3 screen, and its full image quality including matching or exceeding contrast, color saturation, the viewing angle and so forth with massive power savings.

The problem with this rosy colored picture is that the new Pixel Qi screen isn’t in production just yet. Heck, Pixel Qi hasn’t even finalized the design yet, much less started making the first screen samples. Don’t get your hopes up about the news above; we very likely won’t see Pixel Qi’s retina display for 2 years at a minimum, and it’s more likely to be 4 years before it’s on any devices.

Good call. It’s easy to say "we can do that too, Real Soon Now" but Apple’s got the technology out there, today, in massive mass-production. Put up or shut up, basically.
I was as excited as the next pundit about the promise of Pixel Qi way back when, but it’s been a few years now and no large-scale manufacturer is using their screens (are they?)… that seems to me to be an indication that PQ screens aren’t as great as PQ would have us believe.