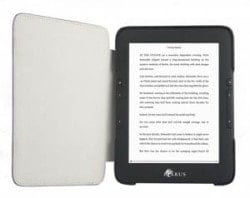 The latest and greatest 6″ ereader from the Dutch reseller Icarus is now listed on Amazon.com. Yesterday my competition reported that the Illumina HD, a 6″ ereader which launched last month, can now be had via Amazon.com for the princely sum of $184 (plus shipping).

This ereader sports a 6″ Pearl E-ink screen with a capacitive touchscreen and frontlight. It runs Android 4.2 on a dual-core 1GHz CPU with 512MB RAM, and 4GB internal storage, It also has Wifi, a microSD card slot, and comes bundled with a cover (hence the high price tag).

As I mentioned when I covered the launch last month, this is a very attractive ereader. It’s not quite as good as the Onyx Boox T68 (which is also available on Amazon) but it does run a newer version of Android on a faster CPU – albeit without Google Play.

I don’t plan to get one myself; I don’t like Icarus’s customer service. But if you do buy one you should know that it ships from the Netherlands, and that you are paying the full EU price. Icarus sells the Illumina HD on their website for 135 euros (119 euros without the cover), and on Amazon.com they sell the same device for basically the same price: $183.

While that shouldn’t necessarily stop you from buying from Icarus, it is an example of why I don’t like the company and will not shop there. And that is unfortunate, because my competitor has one and he says it is not bad:

I’ve only been using the device for a couple of days, but the software seems to run a little smoother and faster than the T68?s. For one, the Illumina HD enters partial refresh mode automatically when scrolling without having to manually turn it on, and it works quite well. The Kindle app comes pre-installed and it works better than on the T68, especially when shopping the Kindle store, which is almost impossible on the T68 for whatever reason.

So far it looks like a promising ereader. The built in reading app is pretty basic, but other apps can be installed. Without Google Play onboard it’s harder to get apps, but I installed both the Amazon appstore and 1Mobile appstore and both work well enough to install Android apps.

Update: At the advice of a couple readers, I am going to buy the OEM version of the Illumina. It costs $100 when bought from China.

Or you could just get a Boyue T61 from Bang good for $100.00. It has the same specifications as the Icarus. I have their 9.7 Inch reader and have been very happy with it.

Thanks for pointing that out; I think I’ll give that a shot.

Looking forward for the review!

And I’m looking forward to how to install Google Play!

I’m certainly going to try, yes. And since I have a number of methods to try I stand a good chance of succeeding.

I’m confused. Isn’t this device the same as one you reviewed mid-July, and which you finally decided not to buy?

It seems you are unable to resist, which is good news for your readers. I’ll be interested to hear how it is, and how it compares to the Onyx. My main concern is quality of the hardware.

Yes. I bought the OEM version of the Illumina a few hours ago, and it should arrive in a couple weeks.

I changed my mind in part because my competitor has a loaner from Icarus. He hasn’t said anything nasty about it, so I am willing to risk $100. (I should probably go add that to the post.)

I look forward to a review like the interactive "lets install loads of stuff on it" like you did for the Onyx. Best review ever. Your competitor didn’t even mention that the Onyx light was bright on the lowest setting. This is why the interactive style you adopted was so good. It allowed us to suggest all the many things to you that you might forget. Still can’t believe you missed the no-flash mode though 😉

That was a good idea, yes. I honestly hadn’t thought beyond the point that I didn’t know what I should test, but in retrospect it’s clear that the unique aspects of the T68 means that everything had to be tested. Unlike reguar Android tablets, we can’t just assume an app is going to work.

I have a question, if anyone knows. Do these device have a phrase search? If I put in I’m looking for books that said "the dog jumps over the moon." will it search across all my books and tell me which books have that phrase. That is the one thing I keep my kindle Keyboard around for. Its a useful function for me. 😀

That depends on the app.

The Illumina’s stock app doesn’t sound like it is up to the task, but the Kindle Android app might be.

Very exciting ereader.
Anyone buy the., can do a video review?

Bang posted a video in the product listing. Let me go see if I can find another.

Dear Nate and all,

this is to inform you that our website now offers the option to buy excluding VAT for overseas customers including the US and Canada.

I also take this opportunity to inform you that we have updated the firmware substantially (it is now available for download on our website) and it further improves the PDF reading experience and adds other features.

Took you long enough. You’ve been selling ebook readers for what, 3 years now?

How is it not as good as an Onyx other than someone who probably works for Onyx said so? I notice on the mobileread thread about this device that the one bad review came from someone with only one post on the forum. Hmmm.

Personally, I suspect the build-quality of everything these days, and don’t like to put down biggish bucks for something that might die in days / months, especially when getting it replaced within the warranty period involves international shipping and a possibly unresponsive vendor.

And audio, I think.

Ohh, and it supports audio

So my new Boyue t61 arrived earlier this week:
https://the-digital-reader.com/2014/08/29/boyue-t61-e-ink-android-tablet-arrived-install/