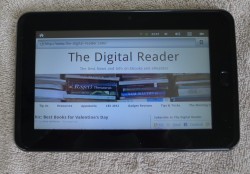 A couple weeks ago I came across a new budget tablet from a company I had never heard of.  Idolian was pitching the IdolPad as being the best tablet for under $100, and for once the hardware has lived up to the mrketing hype.

My review unit arrived last night, and after playing with it for about hour this morning I have to say that I am surprised at the quality. I don’t have much time to write about it today, but I did note a few interesting details.

The IdolPad is a 7″ budget tablet running Android 2.3 Gingerbread on a 1GHz CPU. It has  black front with a slightly rough-textured back. Build quality is pretty good but I am a little concerned about one detail. When I press on the back I can see the impressions on the LCD screen. But I can live with that because this is a $99 tablet and the rest of the tablet seems well built.

The LCD is only 800×480, but the color quality is decent (I’m not aa video buff) and the viewing angle is quite wide. It’s not aas wide as the iPad but it is better than most cheap tablets. Touchscreen is 2 finger resistive, and I can see dimples when I press the screen.

I’ve installed  few apps, and I can confirm that this tablet shipped with Android Market as well as  good suite of apps (all the basics are covered). It also has  well designed custom home screen so you won’t have to go searching for your basic needs.

I watched a movie and tried a few ebooks. They worked fine.

In case anyone wants a look inside, the FCC ID is: ZRD-N71. On second thought, don’t look. My unit looks nothing like that one. Mine is nicer and it has more ports. Speaking of ports, I can confirm that it has HDMI out, USB (host & client), speaker/mike, headphone jack, and a microSD card slot.

On a related note, this is a loaner review unit. But in case anyone is wondering I also bought one (just to make sure it got into my hands).  I spent my own money on it and I currently plan to keep it. I think that gives my opinions above  a completely different tone, don’t you?

I’m planning to keep it because it has Android Market now and Idolian has promised to release an update that runs Android 4.0. That’s going to make this the best $99 tablet (again).

This is not the only $99 tablet with Android Market, but it is the only I’ve seen that has it legitimately. All the others required  hacked firmware. While those firmwares were easy to install, the installation process doesn’t always work. Not having to hck the tablet is a good thing.

Amazon Launched a Kindle Sale for its Anniversary

Being that I use a stylus often with my capacitive based tablet, I could be satisfied with a resistive screen, if the cost difference was significant. I wonder if we will stop seeing resistive altogether at some point on tablets, or whether there will always be a niche for them due to cost savings.

Digital reader, I know that you are specifically looking at affordable Android PMPs and tablets, but since you’re in this Andro-gadget world, have you considered the Galaxy Note?

I have one, and it’s just the best phone I’ve ever had. I still have to use my laptop, but I use it considerably less. Chances are the Note will leave most of your gadgets gathering dust.

Why, well, the reviews out there tell it in much more detail. But basically, the screen is larger and better than that of any other pocketable gadget – and the Note is easily pocketable. This means that almost any task is a lot easier, nicer and funnier. Seriously, the Note is the most addictive gadget you will find. So the screen is the biggest bonus. Everything else – camera, GPS, performance – is top notch as well. Battery is above average and the S-Pen is a nice addition that you can choose to either implement in your workflow or not, personally I use it a lot.

For the same price as other high-end phones, the Note is miles ahead of everything else. The only thing missing is ICS and that’s coming in a matter of weeks.

[…] Android tablet, and it’s not even the first one to sell for under $100. But like I said in my first impressions post, it is probably the best one on the market today.SummaryMy experience with the IdolPad was pretty […]