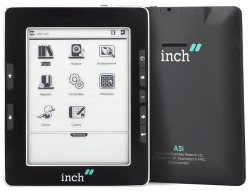 Smaller is better would seem to be the theme with the Inch A5i  which was just unveiled in Russia.

The A5i  is Inch’s 6th ebook reader and it’s going to be a budget ebook reader based on the older generation 5″ Vizplex E-ink screen. It lacks Wifi or a touchscreen, but it has a speaker, g-sensor, microSD card slot, and 2GB Flash. As you can see it has page turn buttons on both sides of the screen, which should please both lefties and righties.

I’m a little surprised at the Vizplex screen. That’s well over a year out of date, so there isn’t much call for it anymore. I would think that this model would have shipped with the newer Pearl screen.

This ereader caught my eye because the hardware is seems very familiar. the overall design bears a striking resemblance to the PageOne, a 6″ E-ink E-reader that I reviewed last year. The 5 buttons on one side of the screen and the ports on the upper edge give the Inch A5i a distinct look.

Now, I now that the PageOne was supposed to be sold in Russia last fall, so this could be a second device from the same developers. In any case, this looks like a svelte but serious competitor at the low end of the Russian market. Retail will be about 3400 rubles ($110).