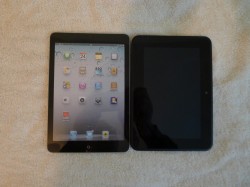 Assuming the following screen image is legit, I think we finally have a price for Apple’s new smaller iPad.

A German language gadget blog reported yesterday that they had gotten an exclusive photo from inside Media Markt, one of Germany’s larger gadget retailers.  Flo’s Weblog is saying that this photo shows that the Pad Mini will come in both Wifi and 3G flavors, with prices starting at 249 euros for one with 8GB of storage. 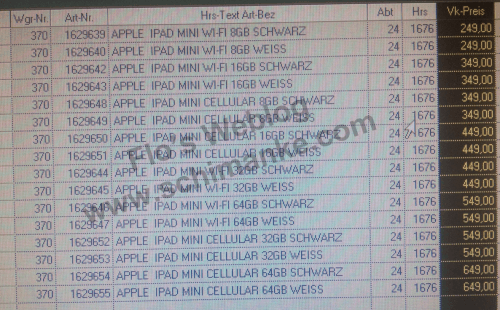 That is a surprisingly cheap price, and when translated to US prices it indicates the the iPad Mini could cost $249. I’m also a little surprised at the limited amounts of storage. Amazon set a new standard when they shipped the Kindle Fire HD with 16GB, one which everyone else seems to be planning to match. Just not Apple.

It’s not clear what the US price will be, but based on Apple’s other pricing decision we can simply swap out the euro symbol for a dollar sign. The iPod Touch is priced at $299 and 299 euros, and the latest iPad starts at $499 and 479 euros. This would suggest that the iPad Mini will cost $249, and that means Apple is indeed undercutting the price of the iPod Touch (though not by much, given that the base iPod Touch ships with 32GB of Flash storage).

Assuming this image is real, I think we can make a couple guesses about the specs.

Assuming my deductions are correct, the iPad Min will be comparable to the specs of the existing Android tablets on the market. It might be better in a few ways, but it won’t be like the iPad, which is better in a bunch of ways.

In any case, we’re going to have to wait until at least the 23rd to find out for sure.

No one ever expected a Retina display or the latest CPU in it. And 8GBs were rumored but I’m surprised to see Apple still going through with that. And yeah, Apple tends to do straight numerical swaps for Dollar/Euro prices, so $249 for that base model.

The other rumor is an iPad 3 refresh with Lightning connector and the latest CPU in the iPhone 5.

Crap, is 8GBs even usable with an iPad? I know of people who went cheap and got the 16GB iPad and iPad 2 and have regretted the lack of storage.

I’m also thinking now that Apple once made a 4GB(!) iPhone and pulled that within months. Perhaps the same thing will happen here, with the 8GB Mini disappearing after stock depletion and then dropping the 16GB one to $249 as the base model.

Oh, the other thing we now know is that it will *not* have the color assortment offered by the new iPod Touch. The listing has just Black and White models.

do you want your mini with a schwarz or a weiss?

I was hoping for a rote iPad Mini. Much of the coverage will be rote, anyway.

Just because no one expected a Retina screen doesn’t mean that it was impossible. Had the iPad Mini been priced at $399, like I expected, Apple might have thrown in the Retina screen.

$399 is too big a premium over other 7″-Class tablets. Pay attention to the Reality Distortion, dammit! Besides, an 8GB Retina-screen Mini would fit what, ONE app? LMAO!

Well, the True Believers expected a "New iPad" in mini casing, but most reports before the Amazon and B&N intros were expecting a shrunken iPad 1. That, is 8GB and XGA screen for $299.
It was only after the Nook HD was announced that the expectation of a "Retina" display came into currency in the rumorsphere.
Now, since "Retina screen" is an Apple trademark, they can define "Retina" as whatever resolution they choose, so both expectations *could* be accurate. 😀

Whoops. I thought the iTouch came with 16GB. That does make a difference.

I don’t understand why Apple would bother with this device, if this is true. Why buy this rather than an iPod Touch? What’s the target market?

It gives Apple a chance to go after the sub-$300 tablet market which was defined and currently dominated by the Kindle Fire. There is a logical progression from Apple’s $500 iPad to their $400 iPad and now the $250 iPad Mini.

Apple hasn’t usually played defense like that. Coming out with a crappy product just to protect their low-end has not been Apple’s way of doing business. If the rumors are true (8 GB, no retina display), this is a significantly inferior product to the iPod Touch, for only $50 less.

Wonder if it will even be able to run ios 6? I suppose it depends on how much RAM and which processor is in it, but I’ve had some experience with new ios updates and underpowed Apple products, and they’re just as capable of being sluggish as any Kindle Fire.

True, but one thing that I kept hearing at the ed tech conference this week was that the $400 iPad cost too much. Rge ipad Mini could be Apple’s plan to get more school district dollars.

And besides, this "crappy product" as you call iy could end up being based on the same logic board as the current iPad 2. Slappig it in a new shell with a smaller screen makes some sense.

>>>Why buy this rather than an iPod Touch?

Because I want a larger screen. And the iPad Mini screen is about the same ppi resolution as the Archos G9 80 — which isn’t all that bad.
http://mikecanex.wordpress.com/2012/07/11/want-to-glimpse-an-ipad-mini-see-an-archos-80-g9-tablet/

I just hope the screen continues with the tradition of eye-popping colors — and not a crap screen like the last-gen iPod Touch had,

There is an inevitable market they have to think about sometime: iPod Touch owners whose eyes are getting older. B\

Tell me about it! I curse all the time about things having too small type on my screen. Use more electrons, dammit!

Also, whether a top Android tablet or an iPad is "better" depends entirely on what the person wants, prefers, and feelings towards the companies involved — both sides have strong positives & negatives.

Electronics products across countries are not priced according to currency exchange rates (which vary daily) but rather on the cost of doing business and what the market will bear.
As Nate pointed out, iPod Touch sells for 299 euros and 299 dollars.
That is a reflection that it is cheaper for Apple to do business in the single 300 million US market than in the comparably-sized but fragmented 27 nation EU with different communications authorities, languages, and consumer laws.

If this is what Apple introduces, they’ll sound particularly ridiculous saying how great the thing is. Hell, the Kindle Paperwhite has 212 DPI.

The NookColor was 169 ppi. That was not bad. And I’ve seen the Archos 80 G9 which is 8″ at 1024×768 and it is not bad. See link above for example. Stop thinking of the larger pixels of the iPad/iPad 2. The screen lacks that graininess at a smaller size.

This is true, but Mark’s reaction is the one you will see on the face of many bloggers should the iPad Mini have a 1024×768 screen. And if Apple cannot do anything better than that screen I would tend to agree with them.

It should be better.

Then those bloggers are whiny-asses who should be stripped of their positions if they can’t see with their own effin eyes that 7.85″ 1024×768 is NOT bad at all.

The only disaster would be if the screen itself was cheap-ass, like the "Retina" screen of the last iPod Touch, which had atrocious viewing angles. (Another hit would be no light sensor — which they ditched in the new iPod Touch. WTF!)

The more important question is when the hell will Apple start with 32GB as the iPad minimum storage and 128GB as the new max? iCloud is for rubes.

Mike, It’s hard for me to use my KFire 1 now with 1024×768 after I’m used to the 1280×800 on that small screen. It makes quite a difference. Maybe it’s also the anti-glare lamination that works well for many when outdoors even.

But to see that 1024×768 on an almost 8″ screen? No. I would think the Apple would go with 1280×800 . Otherwise they’ll come out with what is visibly an inferior product vs the KFire and Nexus. I don’t count the Nook
Tablet HD much because they won’t allow apps from 'unknown' sources, which is very crippling even to the most mildly-tech types.

On the other hand, 8GB is workable ONLY if they don’t make it HD-file focused. It’s about 3.3x difference in file size up to HiDef level…

So it may well be at 1024×768 and 8GB. Not very attractive. They’d be going after only those already wed to the Apple system and wanting baby iPads for the kids or to have as a portable unit outside.

And both the 7″ and 8.9″ have loud, clear dual speakers with Dolby Plus (whereas the current iPad3 has one speaker — will they change this for the 7.85″ ?

Then there’s the micro HDMI out. So Apple will need to have done more than is being said (and they probably have quietly done more).

I prefer the older KF screen. A lot of apps have not been updated for the higher res screen on the new KFHD. They use the same graphics as before and thus look smaller. Angry Birds is one example.

Maybe that’ll be the logo for the baby unicorn TV carpet bombing?
"XGA resolution isn’t bad!"
Which is true, XGA at 8in isn’t bad.
It isn’t insanely great, though. 🙂

Wait a minute… First, aren’t you a Retina display worshipper? 🙂

Really, a good reference would be the 7″ Android tablets at 1024X600 (e.g., the Samsung Galaxy Tab 7 2.0), which is also 169 DPI. That’s not _terrible_, but it’s nothing to write home about and doesn’t compare to the alternatives at this point.

When Google and Samsung release the Nexus 10 with 299 DPI, the iPad Mini will start looking even worse.

Uh, yes.
But the Nexus 10 is aimed at the full-sized iPad and will likely run closer to US$500 than whatever the baby unicorn is priced at.
Mind you, it is theoretically possible both end up at $399 but the word on the Nexus 10 is that it is meant as a premium-price tablet with premium features aimed at the bigger iPod. There really shouldn’t be much cross-shopping there.

This must be a fake.
100 euro extra for a 16GB device compared to the 8GB?
That’s way way too much, even for Apple…

I love the smell of speculation in the morning.