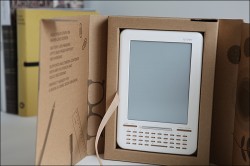 iriver have announced that their latest 6″ ebook reader will soon be available in Russia.

The Story HD comes with the same Collins dictionary as well as 200 free titles in English.  And yes, that’s for the Russian market. I hope they at least switched over the keyboard, but given that the dictionary is the same I doubt it.

There’s no sign of which ebookstore the Story HD will access from on-board the device. There’s also no mention of Wifi, so this might not be the same model as in the US. Retail is set at 5,600 rubles (~$196 USD). It’s due out next month.