As the first day of BEA 2014 draws to a close, I am reminded of just how many of the new startups I saw reminded me of startups I saw in 2010 and 2011. Several companies, including one which is getting a lot of attention today, launched new efforts to serve niches like social reading, enhanced ebook creation, and virtual author events.

Given the similarities between what I saw today and what I saw in the very same exhibit hall 4 years ago, I thought it would be interesting to look at 4 newly announced (or expanded) services in relation to their predecessors. Please note that I am not predicting doom for any of these companies, just noting the similarities. 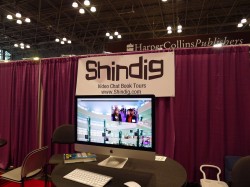 This company is showing off a platform which is designed to support large-scale video chat events. It’s been under development for the past 3 years, and in fact it is already being used by The Atlantic Monthly, Forbes, TED, and other organizations for their conferences. Shindig had a big booth to show off their tech, but it doesn’t require much more than the webcams most of us already have in our computers.

That is a key difference between Shindig and a company I saw at BEA 2011, iDolVine. That company demoed what they said was "the world’s only authentic, verifiable, personalized autograph and live face-to-face author/reader". It was a cutting edge demo of a virtual book signing, and iDolVine went all out for promoting it. They got Neil Gaiman, Margaret Atwood, and other famous authors to sign authographs either in person or remotely.

IdolVine requires a fair amount of hardware, and that can be a problem. I was only watching the demo for a few minutes when they had to shut it down. Interference from something was causing feedback in the speakers. I later found out that they’d been having trouble the day before, too. I’m sure the technical bugs can be hammered out, but I’d rather go with a system that has fewer parts.

As I recall, IdolVine never could get the tech to work right. This company eventually dropped off my radar sometime in late 2012, and it now appears to be defunct.

Shindig, on the other hand, looks like it has a better shot at success. They went with a simpler and more universal platform which relied on tech most people already have. You can try it for yourself on the Shindig website. 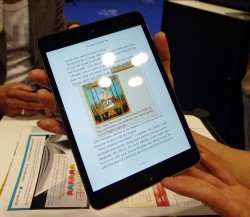 This is another enhanced ebook startup. BeneathTheInk has a platform which gives authors the option of embedding footnotes, audio, video, images, and other bits of useful information in ebooks. BtI’s extras are hidden from readers until they click a linked word, and then the extra content appears in a small window. The company says that they can distribute ebooks to Kindle, Kobo, iBooks, and Nook Stores.

If you ask me, BeneathTheInk follows in the footsteps of Vook, which launched in 2009. That startup was the first enhanced ebook maker of the modern ebook era (this doesn’t include historical predecessors like Voyager’s Expanded Books). Vook made ebook apps with embedded audio and video, and later expanded to distributing the ebooks in the Kindle Store and in the iBookstore.

Vook later pivoted (in 2011) to making enhanced ebooks for 3rd-parties, and in 2012 the startup pivoted to focusing on ebook distribution as much as creation. Their first effort failed because most of the ebooks they sourced from just weren’t very good in the first place, and their effort to make enhanced ebooks for 3rd-parties didn’t work out either; in 2012 there just weren’t enough authors or publishers with both the content and the funds.

But that was 2 years ago, and BeneaththeInk might have better luck. (I decline to form an opinion on the matter.)

The Ohio-based media company Midwest Tape was at BEA 2014 to show off the latest addition to their Hoopla digital content platform. In addition to distributing movies, Music, and audiobooks, Hoopla now supports a pay-per-use ebook lending service. This transactional model means that libraries basically rent an ebook each time it is checked out.

The Hoopla platform carries 170,000 titles, though I couldn’t get specifics on how many titles were ebooks vs other types of content. The platform is live now, and includes media apps for Android and iOS.

I am expecting moderate success from Hoopla. After all, the idea of pay-per-use has already been successfully tried in the library ebook market. Library Ideas, one of Midwest Tape’s competitors, launched a similar service in 2011. Freading currently carries 20,000 titles, and counts a number of libraries as paying customers.

And last but not least, we have Librify.

This year old startup is getting a lot of attention this week with the announcement of a book club type of social reading platform. Librify has already signed numerous publishers, boasts of a 750,000 title strong catalog, and has signed a major retail partner, Target. It’s going to offer both an ebookstore as well as a membership program with both free and paid levels.

Librify was in fact the company that inspired this post. I spoke with its founder, Joanna Harper, today at BEA 2014 and what she told me about Librify reminded me of Copia.

Copia is now known for its white label ebookstore platform, but it originally debuted in 2010 with a social reading platform which included integrated ebook readers, apps, and a website. Copia’s platform never went anywhere, largely due to their inability to get the tech to work consistently.  The developers bit off more than they could chew, and by the time the platform launched in early 2011 there really wasn’t much interest in the idea any more.

Will Librify have more success? I don’t know, and I decline to prejudge. (This is the new, more optimistic Nate. Enjoy it while it lasts.)

Of the 4 companies profiled today, 3 are making a new try at an idea which had failed in the past. Nevertheless, I am hopeful that the new startups will have more  luck. Several years have passed since the previous startups tried and failed, and both tech and the ebook market have changed enough that one cannot assume that past failures predicts future failures.