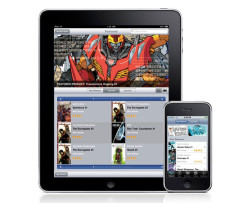 One of the companies which Comixology crushed in taking control of the digital comics market is back again with a new app which targets the DRM-free comics market.

Bleeding Cool reports that iVerse was showing off a new app last week at NY Comicon that BC is describing as the iTunes of digital comics. Not only will the app support the digital comics sold by iVerse, it will also support CBZ and CBR formats.

That is by no means new; there are any number of apps which support those formats on iOS, Android, Windows and other platforms. But iVerse is also going to add a feature which all (most?) of those third-party apps lack:

iVerse’s panel-by-panel reading system, called You View, also has a system that beat ComiXology’s Guided View. You, the reader can add your own viewing experience to a comic you have… acquired, editing how each panel and page will be displayed to you.

Not only that, but creators and publishers will have access to how their comics are displayed in You View and can edit them to their satisfaction, to make for the best reader experience. Full of editing features like cropping, sliding in borders and automatically centring images. And the YouView guide is saves as a separate file, so it can be used for each translation, rather than having to save or create a YouView version for each when you add a new language.

As someone who, for technical reasons, is having difficulties getting into digital comics I am deeply interested in this new feature.

One of the weakpoints of certain comic book formats, in particular the open formats like CBR and CBZ, is that each page of a comic is displayed as a single image. This doesn’t work so well if the image is larger than the screen it is being viewed on, which is part of the reason why Comixology, Amazon, iVerse, and other companies have developed guided viewing modes (which move you around a page so you can follow the story better).

And now iVerse is going to enable readers to create a guided reading mode for digital comics they own – and then share those guides as separate files.

Wired to add exclusive videos to their iPad app