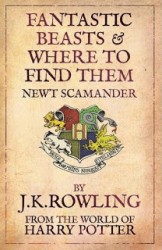 Harry Potter may have grown up and had kids of his own but that doesn’t mean the fun has to stop.

J.K. Rowling has announced today that she’s signed a deal with Warner Brothers to write a script based on one of the fictional books mentioned in the Harry Potter series.

It all started when Warner Bros. came to me with the suggestion of turning 'Fantastic Beasts and Where to Find Them' into a film. I thought it was a fun idea, but the idea of seeing Newt Scamander, the supposed author of 'Fantastic Beasts', realized by another writer was difficult. Having lived for so long in my fictional universe, I feel very protective of it and I already knew a lot about Newt. As hard-core Harry Potter fans will know, I liked him so much that I even married his grandson, Rolf, to one of my favourite characters from the Harry Potter series, Luna Lovegood.

As I considered Warners’ proposal, an idea took shape that I couldn’t dislodge. That is how I ended up pitching my own idea for a film to Warner Bros.

Fantastic Beasts and Where to Find Them is a magical zoology book mentioned in the first Harry Potter novel, and it generated so much interest among Harry Potter fans that it was published as a real book in 2001. It’s 42 pages long, and can be found as a paper book on Amazon and other sites. You can also buy it as an ebook from Pottermore.

There are no details yet about the story, but I am hoping that the movie will stay true to the idea that this is supposed to be a zoology book. I would like to see the movie made as a documentary, but there’s a good chance that I will be disappointed. Action movies sell better.

I can see her telling the story of how the book came to be.
If the author’s grandson is Harry’s age that would make him around McGonagal’s age so they could be some fun cameos.

New York in the 20’s?
Oh, this is going to rock. And it’s a series!
I hope the screenplay sucks her into doing a prose novel trilogy for adults.

I ran off to purchase this.Thanks! Didn’t know it existed. I have only read one book in the HP series and have watched the first three of the films. Guess I’m not a good HP fan. I found film 4 onward to be rather boring on the screen. Prefer to read the books instead. One day.

[…] Warner Brothers announced last September that JK Rowling would write the script for a new movie set in the Harry Potter universe, few […]