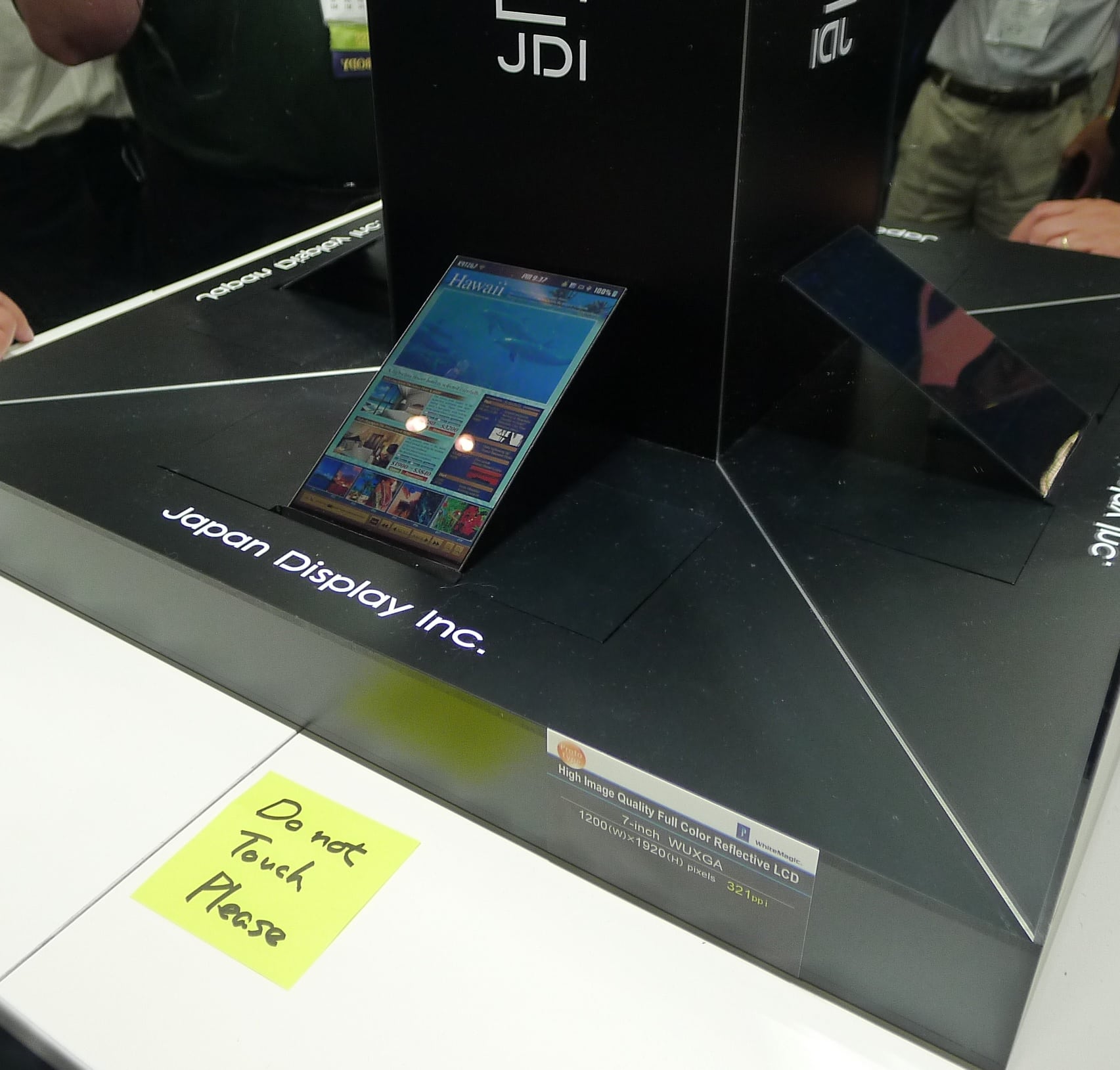 When I first broke the news early last year that Amazon was buying Liquavista, many people wondered why Samsung would part with the company rather than  simply sell the screens to Amazon and any other interested party. Earlier today I was browsing the booth of Japan Display Inc, and I found a good example of why there is no market for Liquavista’s screen tech.

JDI had many different screen tech samples on display, including a high-quality low-power solution called White Magic as well as screens intended for industrial use, smartphones, and tablets. They also had a reflective LCD screen on display which they launched last year but don’t have in production.

This screen is visible in sunlight, making it ideal for a number of use cases, but no device maker is using it. Instead all the device makers are going for either generic LCD screens (with backlight) or high quality LCD, LED, or OLED screens. (I’m sure the relatively narrow viewing angle isn’t helping either.) 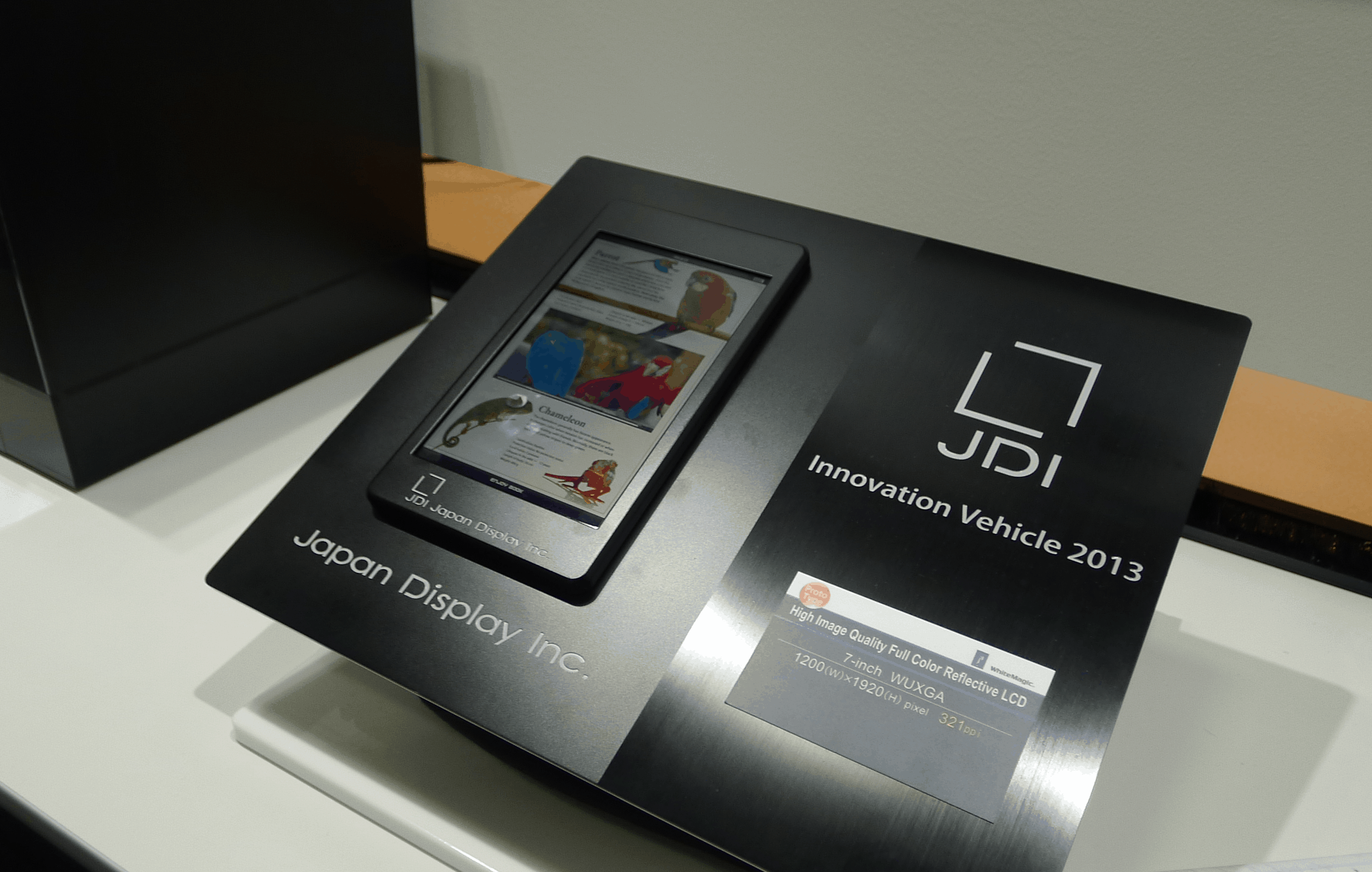 Here’s the kicker. I asked, and I was told that JDI could make this screen today – if they had the orders to fill. But they don’t have the orders, and thus the screen remains a demo unit on a show floor.

While that screen is based on different tech from Liquavista’s screens, it is similar enough in concept that it is arguably a competitor to Liquavista’s low-power, sunlight visible screen tech. To put it simply, there doesn’t appear to be much of a market for screens like this, and that’s because color quality trumps battery life at the moment. So long as that remains true this type of screen will stay a rara avis.

The only company interested is Amazon, and they bought their own screen tech company in May 2013. It’s not clear why Amazon invested in Liquavista, but I do know that they have been hiring researchers and developers since February 2014. Amazon of course hasn’t said anything about their plans, but I am ever hopeful that we will see a Liquavista screen on a Kindle eventually.

I’d totally go for a device like this. It’d be great for reading comics and other stuff outdoors. Maybe even indoors. It could even be fun to game a bit on it. It actually kinda looks like paper in the picture so it would be fun a fun experience, like a magic book of sorts.

Paper may not be replaced while we haven’t color epaper. Shame.
A company (IRX Innovations) has promised color epaper high quality. Well see..

I wonder whether the only have that size. It would be good for a cellphone. Although annoyingly, manufacturers don’t even seem to make small phones anymore. It’s hard to find any young premium phone with a screen size below 4.5 inch.

7″ makes for a good display unit at trade shows.

The technology was not ready for volume production and needed big(-ish) investment just to get there. (Rather like Mirasol, which was brought to market too early and killed its credibility.)
With LCDs getting increasingly better at power management Liquavista will at best be a niche product but the niche it fits is right in Amazon’s market.

For Samsung a successful Liquavista would mean a few techie accolades and a trickle of cash but for Amazon that trickle buys them a leg up on everybody else in ebooks. And a chance to get out from their dependence on Eink (the company). A failed liquavista would just be a small tax write-off and Samsung has no need of that. 🙂

Bottom line: Liquavista’s risk vs reward made more sense for Amazon than Samsung.

Oh, and the JDI tech isn’t in use because they need a *big* order to justify production. When they say the await a customer they don’t mean somebody ordering 30,000 units but rather somebody ordering a million. Amazon. Apple. Microsoft numbers.

"a chance to get out from their dependence on Eink"

If Amazon wanted to be independent of E-ink they could buy the company. E-ink’s revenues are under $100 million a year, and Amazon can afford to throw a billion dollars around to buy the company.

No, I think Amazon went for Liquavista so they could get a better screen.

Well, sure. Liquavista is gamble worth taking.
But buying Eink itself is actually riskier in a political and legal sense. Amazon buying the primary source of their competitors' screens would bring in added scrutiny and cries for equal access; no more sweetheart deals giving them preferential, near-exclusive access to the next incremental improvement screens like they had with Pearl and early Carta.
Plus, there is the likely possibility that (electrophoretic) Eink tech is a dead end with limited improvement ahead.

If Liquavista pans out, not only does Amazon get a source of color screens but also an in-house option for premium B&W screens. Even if they don’t exercise the option, it gives them extra negotiating leverage with Eink.

One gamble at a time is enough. 🙂

I was thinking that if Amazon bought it, they could be the ones to push industrial and commercial uses into production (like E-ink on Tyvex), and then use that in their warehouses.

Oh, and if Amazon had bought E-ink back before E-ink had bought Sipix, they could have claimed that there was adequate competition to forstall monopoly complaints.