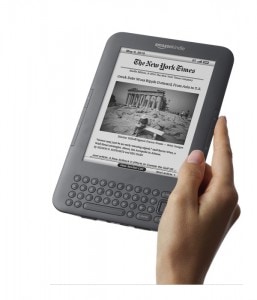 The British retailer John Lewis have announced that they will carry the K3 starting on 1 November. The retail price will be the same as Amazon’s.

"We are excited that such a well-respected company as John Lewis will be offering the newest Kindle and Kindle 3G to its customers", said Gordon Willoughby, director of Kindle at Amazon EU.

"John Lewis will be offering its customers a great experience with Kindle – the ability to think of a book and be reading it in less than 60 seconds, read on a screen that looks and reads just like real paper, and carry thousands of books with them wherever they go in just 241 grams".

They’re joining the ranks of Target, Staples, and BestBuy, and I’m pretty sure John Lewis are the first retail chain outside the US to carry the Kindle. I’ve heard of a number of chains that carried it unofficially (with a hefty markup).

Amazon is Quietly Working to Explode the Audiobook Market