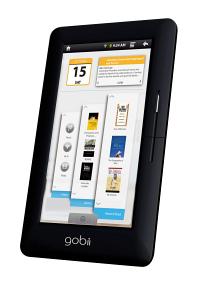 Kalahari.com, South Africa’s answer to Amazon, announced earlier this week that they were about to launch a new ereader/Android tablet.

I don’t have all the details on the Gobii Wifi, but I do know that it’s a 7″ Android tablet with Wifi, 4GB Flash storage, a microSD card slot, and a speaker. It also has a rather odd home screen as well as decent support for video, audio, and Adobe DE DRM (PDF & Epub).

But I would also guess, based on the image at right, that I’ve had my hands on similar hardware. The Gobii Wifi looks awfully similar to the Aluratek Libre Touch, an ebook reader that I reviewed a few months back. The Libre Touch had decent hardware, but it was hampered by the outdated firmware. It was running Android v1.5 and that’s so old that few apps support it.

But that was some time back, so there’s a good chance that the Gobii Wifi is running on a later and more modern version of Android. That would be good;  the Libre Touch had a nice vibe for a budget tablet.  In any case, the Gobii Wifi is coming in early November with a retail of 1,299 rand (~ $163 USD). The price includes a 200 rand credit for the Kalahari.com ebookstore.

On a related note, the Gobii Wifi is actually Kalahari’s second ereader. Back in August they released the Gobii Color, a basic 7″ ebook reader. I’ve had my hands on that one as well (as the Aluratek Libre Color). It was decent but not spectacular.

am in kenya,how can i get that gobii tablet and at how much

Get 3500+ professional certifications with real questions and answers. topbraindumps is only 1 place where you can find all your professional certifications exams verified questions and answers. topbraindumps also provides you updated Test Engine to enhance and your learning and practice skills. Get a huge discount and pass your exam on the first attempt. Feel free to ask anything about the exam. Our chat support will help you 24/7 to sort out your study problems. Get a free demo before you purchase.
topbraindumps