Kindle DX Hacked to Act as a Second Monitor (Video) 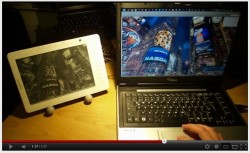 For the longest time I’ve wanted to know what it would be like to have an E-ink monitor, and now it looks like I will finally have the chance.

A hacker going by the name of TinyApps has posted instructions on how to convert the Kindle DX into a second display. This is a tethered solution, not wireless, so you’ll need to dig out your USB cable. The instructions are also OSX only, so Windows users are out of luck for a change.

You can find the instructions over on TinyApps.org, but if you just want to see it in action scroll down for the video.

It doesn’t look terribly useful to me at lest not how it is implemented in the video. The refresh rate is slow, of course, but the real issue is that the screen is tethered. Half the value of having the DX as a second display would be to get away from my desk with it.

I think the similar hack for the Nook Touch might be better. That one works over Wifi. Of course, it probably also requires an Android app, so it’s out of the question for the DX (at the moment).

The Developers are Rioting in KindleTown

eReaders Can Disrupt Your Sleep, and Other Nonsense

Is the normal functionality (i.e. reading ebooks) compromised? Can you switch between "monitor" mode and "reader" mode?

[…] went by the wayside once it got into customer’s hands. We’ve seen Kindles hacked to act as second monitors, stream video, be a weather station, and even play […]