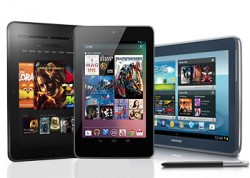 We’re probably never going to have real sales figures for the Kindle Fire or most other Android tablets, but all signs point to some moderate gains in market share.

Chitaka has just released new figures based on a survey of a sample of hundreds of millions of impressions from its advertising network between December 1 and December 27, 2012. Their data shows that the Kindle Fire, Samsung, and even the Microsoft Surface have picked up market share at the expense of the iPad. Amazon might not be boasting about sales of the Kindle Fire, but it looks like the number of KF in use in the US and Canada went up by about 2 thirds after Christmas. That family of tablets counted for 7.5% of Chitika’s ad impressions in the 2 days after Christmas, up from 4.48% before. 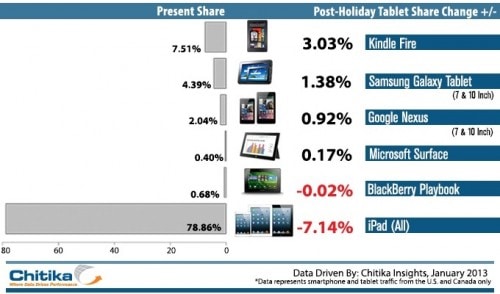 The Nook hardware isn’t mentioned in this report, unfortunately, so all we know at this point was that before Christmas B&N accounted for under 1% of ad impressions. That placed the Nook devices behind Google’s Nexus tablets at the time, and given B&N’s poor sales report yesterday it is a near certainty that the Nook still lags

So where did all this growth in market share come from? The iPad. Chitika noted a drop of over 7 percentage points in the number of ad impressions received by the iPad. This, I’m sure, will have Apple crying into their beer as they weep over a mere 78% market share.

That last figure is the most important, I think, because it shows that no matter how much the competition has worked to catch up to Apple they’re still just nibbling around Apple’s ankles.

What’s more, Chitika expects the gains made by Android tablets to shrink in the next few weeks:

However, despite the gains by competitors, we expect that the iPad’s share of tablet traffic will return to the 80% range, albeit lower than pre-holiday levels, as users return from vacation and browse with their new devices less frequently.

I’m not so sure that will happen. Yes, gadget owners do tend to use their devices less as time goes by and a fraction will even abandon a device. But that theory also applies to iThings, so there’s no guarantee that the iPad will regain the lost share of ad impressions.

Ingram is Getting into Library eBooks 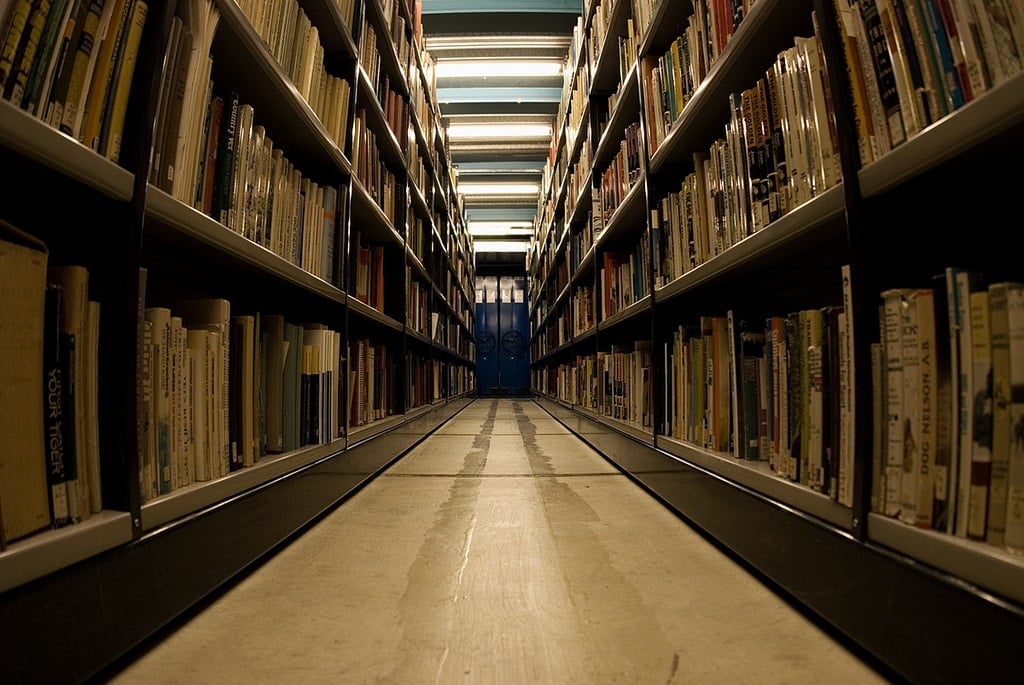 I was surprised to see Nook installed base as just a bit ahead of Playbook.
Too bad Nook is not listed in the new charts.

Edit: But it is worth a mention here as well. Thanks!

Do you know the really interesting part about these stats?

It looks like Amazon could have boasted about having great Kindle Fire sales – better than last year. All they would have to do is not mention the ereaders. I wonder why they didn’t?

Yes, they could have bragged. In one month they increased the FIRE installed base by two-thirds of what they had sold over a full year.

But why should they? I dunno, but…

1- If the eink readers sold well (no big sales on them at all, right?) bragging brings attention to their high market share at a time their main opposition is tanking. Why bother crushing an opponent already at risk of implosion? Especially if doing so draws government attention?

2- If the eink readers didn’t sell well (despite all they have going for them; price on the K4b and the screen on the KPW) why draw attention to that and end up defending your position? You don’t want to let your enemies see you sweat.

3- Either way, Amazon considers the extent of their success to be proprietary data because it forces their opponents to guess and opens the door to mistakes. Like overestimating demand for their products.

They said Black Friday sales doubled last years'. Odds are, *their* december was flat after that. Which beats a 12% drop (on top of inflation). Sound reasonable?

The one outfit that does know (eInk) isn’t talking.

Ever hear of "Gorillas, Monkeys, and Chimps?" 76% market share is a Gorilla. Interestingly, there is no Monkey yet and only Chimps at those very low market share numbers. I think Samsung will become the Monkey that can challenge the Gorilla’s huge share but I bet Apple stays in the plus-60 category for many years and maybe we will see Amazon make it to Monkey status, although I have my doubts. Consumer hardware is the toughest market space out there.

I think you may have chimp and monkey reversed. Chimps outrank monkeys, I think:
http://www.ecademy.com/node.php?id=170247

But the point still remains true. Apple is the Gorilla in the tablet market, and Amazon is the best nominee for chimp status.

That assumes the business breaks down to a 70-20-10 market split.
Which is not the only possible structure for a freely competed tech market.
You could have "Snow White and the Seven Dwarves" like the 60’s mainframe business where IBM racked up two thirds of all mainframe sales and the rest was competed by seven other players. Which by the 70’s was down to IBM and the BUNCH (Burroughs, Univac, NCR, Control Data, Honeywell) and by the 80’s essentially IBM and nobody else.

The thing to bear in mind with tablets is that they are by design a limited-capability product intended for communication and mobile content consumption. There is an upper limit to the capabilities that requires andd when it is reached, even the most generic (and cheapest) products will suffice for most customers. At that point economies of scale and manufacturing learning curves will take over and start driving margins down.

Since Apple and low-margins don’t mix, there will be an ever-larger price gap between the iOS "premium tablets" and the generic "commodity tablets" which will likely drive Apple’s share downwards. As with PCs in the 80’s (another commodity electronics market) the likely market share "winner" 5 years out will be "other".

In other words, in the long run, in the race between Apple and the field, bet on the field.
Think of it as a Gulliver in Lilliput market.

You already noted this detail, but the numbers are only for the US and Canada. Android devices have a markedly higher share outside that region (although in tablets is less than the iPad, that’s for sure).

In general, I would trust the global numbers from Statcounter rather than an ad network, specially if it’s from a single region.

I forgot about Statcounter. They do offer better stats, but not at the same granularity as Chitika did here.

And I don’t put much weigh in Chitika beyond ad impressions; it doesn’t necessarily correspond to market share.

I would take this with a grain of salt, market share as per ad impressions sounds pretty dubious to me. Anyway Chitaka is not what I would call a trustworthy source, see:
http://www.zdnet.com/why-you-should-be-skeptical-of-chitikas-market-share-reports-7000009363/

Then there is NPD’s report, suggesting that consumer electronics faded badly in the holiday season.
https://www.npd.com/wps/portal/npd/us/news/press-releases/black-friday-and-cyber-monday-weeks-gain-share-of-2012-us-ce-holiday-sales-according-to-npd/

How soon next year will the tablet bubble pop? Place your bets here…