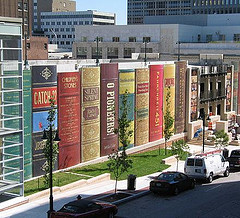 I noticed a curious little detail about Kindle library ebooks over the weekend, and while I don’t know what effect it will have I do think it’s important.

Last week Amazon and Overdrive rolled out the new support for Kindle library ebooks. In the space of 5 days, we went from having no library support to being able to checkout ebooks from any of thousands of libraries in the US.

There’s an interesting twist in how Amazon and OverDrive pulled off the technical details. OverDrive’s partner libraries are offering Kindle support but they didn’t have to buy any new ebooks. Instead, they are able to lend titles that they had already purchased as Epub and PDF. If a library bought a title and if Amazon have that title in their store then the library’s patrons can check out the ebook and read it on a Kindle.

Did you catch that second condition? I’m pointing it out because it is critically important to the library ebook market. That could be how Amazon will affect the market.

A library can only lend a Kindle ebook if Amazon already sell it.

Put yourself in the place of a librarian who is looking to buy more ebooks. If you had to choose between 2 titles, and only one was available for the Kindle, which would you choose? I would think for economic reasons alone that a librarian would chose the title that could be read on the Kindle over one that could not. It’s a better value for the library to support as many readers as possible.

I suspect that as time goes on that we will see Kindle availability having an effect on library ebook sales. That might not be important now, but imagine what will happen when ebooks grow to be a larger part of the overall market. A title that is not available on the Kindle won’t get the same exposure in a library as one that is available. Readers won’t find it, so they won’t read it. That means they won’t be as likely to talk about the title and they won’t be as likely to buy their own copy.

What effect do you think Amazon will have on library ebooks? I’d particularly want to hear what librarians have to say about my idea.

Sony Gets Out of eBooks, Hands Customers to Kobo

You’re right; Amazon probably saw this coming. But did anyone else? Lot’s of people wanted Kindle library ebooks; how many of them thought about the consequences?

It seems that Amazon has an agreement that it can lend out a Kindle copy of a book if the library has purchased an ePub/PDF copy of the book, provided that the ePub/PDF copy doesn’t get loaned out at the same time.

Surely the obvious next step is for a similar agreement for print books? That would surely be an massive advantage for Amazon, if they could get agreements to allow it.

Now that is an idea I had not considered. I’d like to say that I don’t see it happening, but then again I wouldn’t have predicted the current situation.

It probably won’t.
But if the BPHs weren’t such scrooges and had even a shred of civic-mindedness, and understood the role of libraries, they would credit all libraries with one ebook license for each active pbook. The goodwill alone would be worth more than any (theortical) lost revenue.

Well, this explains why Amazon still refuses to put ePub books onto a Kindle. It looks like a very smart move on their part, but I have to say I don’t know how much difference it makes from a practical standpoint. Amazon probably already has more selection than anyone else as far as English-language ebooks. It might be said to make it less likely for authors/publishers to have exclusive deals with other retailers, but since Amazon has so much of the market already, I don’t think that has happened much, except maybe for enhanced ebook apps that are iThing only.

Hmmm. Whether you like Amazon or hate them, they are not stupid. That’s for sure.

The big "unintended consequence" is likely to be the withdrawal of the publishers from library lending. B&N’s Nook has a feature which allows e-books to be lent — just once — to someone else provided the publisher approves. After Kindle added the same feature, the major publishers all withdrew from the LendMe program. The biggest publishers I know of still participating in LendMe are Scholastic and Kensington.

As for public library lending… Macmillan and Simon & Schuster already didn’t permit library lending of their e-books. HarperCollins instituted a 26-lend limit on theirs. And that was *before* Kindle came on the scene. I expect to see more limitations and/or withdrawals over the next few months.

IDK, this assumes that the buyer of a particular type of book is also the person who buys the e-book. For instance, I buy the 600’s–cookbooks, car manuals, etc in print. I’m not very involved in purchasing electronic services. So I’m not looking at that side of it at all.

This is a strange article.