When I first reported the launch of the Kindle Voyage last week I said that the $199 price tag was more than I was willing to pay for a 6″ ebook reader, sight unseen, but now it would seem I am in the minority.

A quick check of the Kindle Voyage page on Amazon this morning has revealed that several of the Kindle Voyage models have been delayed as late as the second week of December. While the 3G+ads model is still scheduled to ship in October, the other three options have been pushed back at least a month (there’s also a quota of two per customer).

It’s only been 4 days since Amazon since Amazon launched this ereader, which was originally scheduled to ship on 21 October. But thanks to either short supply or high demand, Amazon has pushed back the ship date on new orders of the $199 Wifi+ads model to 21 November, and they have also bumped the ship date for the ad-free models (both 3G and Wifi) all the way back to 7 December.

Amazon says at 7.6 mm thick, the new Voyage is their thinnest ereader yet. It sports a 300dpi screen, page turn buttons, and 4GB internal storage. 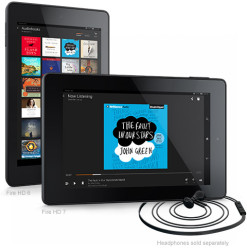 It’s not clear just how many Kindle Voyages Amazon has sold, but we do know that the new tablets aren’t similarly blessed with a demand that exceeds supply. Both the new 6″ and 7″ Kindle Fire HD tablets are still scheduled to ship either on 2 October (black) or 16 October Citron, Magenta,White, or Cobalt). And of coursethe updated Kindle Fire HDX 8.9 is still scheduled to ship on 21 October.

Similarly, the new basic Kindle is still on for 2 October. That model is more of a revived Kindle Touch (minus the audio) than a new edition of the old basic Kindle, and with its launch Amazon reduced their development costs considerably.  Now they can maintain one version of the Kindle OS, and customize it for 3 screen resolutions, instead of supporting different versions of the OS which ran on disticly different hardware.

So did you order a Kindle Voyage?

I ordered one although I really don’t need another e-ink reader. If it had been a PW3 with minor changes, I would have stuck with my PW1. This one has enough differences that my curiosity is piqued. BTW, the delayed shipping date on the Voyage is accompanied by a "limit two" restriction. Ebayers may have preordered a boatload of them.

Maybe Amazon did not receive enough orders yet to pay to produce a significantly large initial batch at their projected cost per device, so that they are waiting now for more orders. And they might want people to be aware of a possible shortage of devices before Christmas in order to motivate them to order now.

The new models always sell out quickly. If you’re interested it getting the newest Kindle model, you should order as soon as it’s announced then cancel if you change your mind.

Or just be patient.

I ordered a wi-fi only special offers unit two days ago, and the estimated arrival date was 11/28.

In the past I’ve given away all of my previous Kindles when getting a new one, but I think I’m actually going to sell my PW2 when this new unit arrives to offset the cost a bit.

Maybe some customers plan to check out the new model and return it if they don’t like it? I believe it is quite easy to return a Kindle in the US?

[…] Kindle Voyage Shipments Delayed (The Digital Reader) Some models of the premium e-reader Amazon launched last week are already back-ordered until as late as December for reasons unknown. Related: Amazon Rolls Out New Line of Devices […]

This news seems to support Felix’s comment from last week:

I suspect they’re supply-constrained. They priced it high to throttle back demand until they can get enough screens to support a lower price.

I did wonder if he was right, yes. That is one explanation.

Ironic that it sold out quicker than the Kindle Fire phone…..