Kindles, X-Ray Scanners, and Other FUD 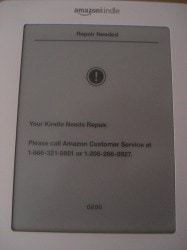 The Telegraph has a piece of quote unquote reporting today about how your Kindle is at risk of being brutally murdered at the security checkpoint in airports. The culprit is the X-Ray scanner that your luggage passes through.

Travellers have been warned that their holiday reading plans could be disrupted by airport security measures, following reports that Amazon’s Kindle ereader can be damaged by X-ray scanners.

The only problem with this scary tale is that it is an urban legend. There’s no conclusive testing to show that passing an E-ink screen through an X-ray machine does any damage, only the anecdotal reports from a small number of ereader owners. And no, the plural of anecdote is not data.

Yes, ereaders die. And yes, some die in close relationship to an X-ray scanner. But that does not mean that the scanner caused the death of the E-ink screen.

For each case where an airport scanner may have had an effect, I could easily find a hundred where they did not. I myself have never seen this effect – ever. Not only have I never seen this, in spite of countless trips through security, I’ve never even met anyone that this has happened to.

Update: Now that i got over being annoyed by this story, let me do some real reporting. Did the X-ray scanner kill the Kindle? Possibly, but almost certainly not by damaging the screen. It is far more likely that the X-ray damaged one of the chips inside the Kindle. I say this because there is considerable anecdotal evidence that the scanners don’t affect the screens.

But the X-ray scanner could affect the electronics behind the screen, and that would kill the gadget just as thoroughly.

P.S. I hate drivel like this. What really annoys me off about this article is the lead. Who warned the travelers? No one. It’s certainly not Amazon. It’s not the airports. It’s certainly not the screen manufacturer, E-ink. And do you know what also irritates me? TRhe thought of all the blogs that are going to regurgitate this emesis.  Now, I’ll admit that simply repeating the myth would be easy. Since it’s fiction I would have no difficulty in coming up with more details to add and embellishing it with even more nonsense. But it’s still a myth with no real basis in fact, so I won’t.

FWIW, laptops have been going through airport X-ray machines for decades, with no ill effects. it’s been proven that those X-ray machines don’t damage laptops (or any other consumer electronics, for that matter), so unless the eInk screen itself is affected by x-rays, i don’t think there’s anything to worry about. eReaders have been around long enough that if there was a real issue, the manufacturers would’ve been warning consumers a long time ago.

just about the only thing that airport x-ray scanners WILL damage is undeveloped film, but they make x-ray-safe bags specifically for that purpose.