Kobo, Borders, and why you shouldn’t dig a grave too soon 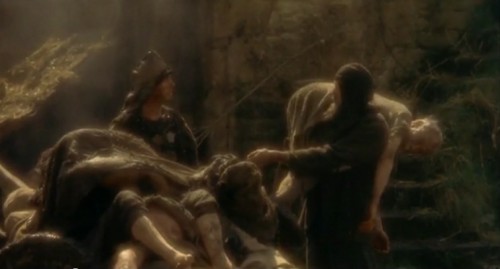 I got an email a few minutes ago from a contact with Borders. She’s upset with me over my interpretation of today’s events, and she might have a point. She thinks I jumped to the wrong conclusion about the meaning of today’s Borders-Kobo news, and more or less that I’m digging the company’s grave too soon.

Perhaps I did start digging the grave too soon.  But Borders clearly have the odds stacked against them. They’re covered in debt, in a shrinking industry, and struggling through  a recession. What are the odds they’ll pull through?

On the other hand, look at Kobo. Last year Kobo instigated an ereader price ware which saw Amazon and B&N drop their prices by over 25%. I thought at the time that Kobo had priced themselves out of the market. Yet they’re still here, and they even announced a new ereader last week.

And then there’s the simple fact that "company survives" isn’t nearly as interesting of a story. Doom and gloom will always sell better.

Kobo’s got nothing to do with it. They just got some additional funding, so they’re in pretty good shape.

Borders, however, is facing a crisis point tomorrow. If the judge fails to grant their motion to extend the deadline for filing a plan to get out of bankruptcy, I’m afraid that’s the end. GE Capital will probably pull their DIP funding, and the Creditors Committee almost certainly will submit a plan for liquidation that likely will be the only credible plan before the court.

This motion to extend is normally routine, but Borders' bankruptcy hasn’t been routine. Despite shedding their under-performing stores, they’re still running at an operating loss, that loss is getting worse rather than better, and the Borders execs say that they’re merely "fine tuning" their operations.

The judge in the case extended the Borders time line this morning. The Gore brothers investment group (known for picking off a carcass and turning around into a viable business what remains) are in the picture of 225 of remaining 405 stores. The extension will make it possible to further these discussions and possibly attract a regional player to pick up a few more of the locations.

If Borders goes, the Big 6 might as well just shoot themselves in the head to avoid the future they’ll be creating. They *need* Borders against Amazon, Apple, Google, and B&N.

Now that just begs clarification: what *does* Borders uniquely bring to the table that is so vital to the Price Fix Six?
Details, maybe?

I think that about sums it up.

Also != Apple, Google, B&N. Really, is it so hard to see that less competition equals less sales? Not everyone with a closed Borders will bother to get a device. Not the casual readers. They might even stop reading altogether. And that’s *good* for the Big 6? For anyone?

Less competition is bad, yes.
But I don’t see anything that makes Borders itself indispensable.

If there truly is a need for an alternative, a new player will jump in or an existing player will expand into the vacuum. I could easily see Books-a-million grow into the gap or some of the fading indies get revitalized, something I would welcome myself.
And that is assuming that the Borders liquidation doesn’t spawn a replacement or two.
Borders itself as it is currently constituted may have little, even negative value, but some of their elements (like the Borders and Waldenbooks name) might have some slight value to somebody looking to fill the gap.

I just don’t see Borders' survival as either likely nor necessary.
Indeed, I think continuing its current zombie existence is hurting all the other B&M retailers. Sometimes, pulling the plug on the patient on life support, however painful it may be, is the only rational option.

I think there is an alternative explanation for the Kobo turnover.

Borders as it exists is done for, whether now or in six months, the numbers say it is headed for Chapter 7.
Consider:
B&N has a print book marketshare comparable to Borders.
B&N has lower debt, lower losses, and 25% of the US ebook market.
B&N put itself up for sale and the best offer it received valued the entire company at $1 billion. Some would argue that the Nook business by itself is worth *more* than a billion, which suggests the B&M side of the business is at best a loss-leader.
Borders only has the loss-leader side, hence no takers for even the already slimmed down package.
Thus, liquidation looms. Open or disguised as a fire sale plus further closures.
Now, come liquidation, *somebody* will end up with the Borders name.
And if that somebody, this hypothetical new Borders, is to endure, it will need to be in the ebook business on their own, not as a front for Kobo.

Thus, I propose that the Kobo turnover is a necessary pre-requisite for a future Borders having even a glimmer of a chance of enduring.
Borders isn’t done with ebooks but only if somebody buys the name for a new, non-Kobo ebookstore. Not impossible but the question that needs answering is how much, if any, of the existing Borders survives to go along with the name.

B&N manages to run their B&M side of the business as a profit. In fact the online business continues to hemorrhage money for them at present. It is sometimes forgotten that Amazon had massive losses for years before becoming profitable.

The problem for Borders is that they have no viable plan to become profitable in the future, probably because none can be had. They owe their troubles to very bad management, and have alienated all their suppliers to boot.

I concurwith the diagnosis of dr. fjtorres. This patient is braindead.

That "some" would be an idiot. B&N is US-only. Nook would have to be spun off and go international. And intl puts it up against Kobo’s headstart and the coming Amazon invasion.

1- ebooks is a technology business; technology businesses are valued for their future growth more than their physical assets
2- Nook as a standalone business commands 25% of the US ebook market
3- Said market was a billion-dollar business (give or take a few million) in 2010 and rapidly growing, looking to triple in four years
http://blogs.forrester.com/james_mcquivey/10-11-08-ebooks_ready_to_climb_past_1_billion
4- even if sales only double by 2014, Nook looks to command $500 milion in annual sales, minimum, which for a pure tech-and-services company is easily worth a billion and more; just look at the valuation of the likes of Facebook, Skype, or even smaller startups.
5- yes, Nook is US only. That is a plus to an investor since it means there is room to grow; Nook is nowhere near tapped out.
6- print book sales profitability is contingent on publishers' willingness and ability to sell the books on spec, which is what the current system of returns breaks down to. This practice is not guaranteed to continue indefinitely. To an investor like Liberty Media this a risk that must be accounted for and degrades the value of the B&M operation.

That the overall B&N company is valued lower than a Nook spinoff would bring is just a reflection of the risks attached to B&M sales of print books in an age where the most prolific buyers are migrating to online purchases and ebooks. To many would-be investors, the print book side is an achor weighing down Nook, hence the fact that Liberty Media seems to be the only bidder willing to keep the company whole.

And why Borders, without a Nook-like growth prospect to offer to would-be rescuers, is drawing such limited bids. And why its dismemberment is more likely than its unified survival.

>>>If there truly is a need for an alternative, a new player will jump in or an existing player will expand into the vacuum.

Your faith in the infallible marketplace would be touching if it wasn’t so often discredited by stark naked brutal reality.

Notice the *if* in my statement?
The issue of Borders providing competition in book sales only matters *if* Borders is competitive. But if Borders were competitive they wouldn’t be in bankruptcy, swinging in the wind, scrambling to find buyers for the pieces.
More, its been reported round these very parts that Borders and B&N sites overlap to the tune of 75% so the hand-winging over people giving up reading because the "neighborhood" Borders closes doesn’t quite strike me as a national crisis. On the contrary, with Zombie-Borders around, both businesses are bleeding; without it, B&M B&N might have a shot at a healthy downsizing to the new market reality.
Think of it as retailer triage, distateful but necessary.

Moving forward, somebody will *probably* buy the Borders name and some of its assets, the ones not poisoned by 20-year leases or sited in fancy glass malls in the middle of communities making less than half the national family income. Published reports so far say *somebody* out there wants 200 of the Borders sites, *if* they can get them cheap enough. That would be a nice enough chain all on its own to provide some of the necessary competition. Or not. Too many of the people bemoaning the loss of Borders by their own admission haven’t bought there in years, they just want it around as a hedge against future domination by the tech industry players. And that is not how the market works; uncompetitive players don’t a free ride to serve as a hedge. Competitive markets aren’t like Kindergarden, where you get an A just for showing up everyday

*If* there is a competitive need by *paying customers* (not pundits) somebody will show up to gleefully accept their money. Its all up to the customers voting with their wallets. Like it or not, that is the reality we live. Most of us have to sing for our supper and see no need for free riders. Whether Borders US endures or goes the way of the aussie version is strictly up to their ability to find and satisfy customers, not to serve theoretical competitive visions.

Moot question at this point. Borders is over and done with. I think the post by fjtorres sums it up the best.