When Kobo was just getting started in 2010 it didn’t have much in the way of ereader hardware, and to make up for that lack Kobo partnered with 3rd-party device makers to load Kobo’s reading app on to those other devices.

This program fell by the wayside as Kobo  released first the Kobo Touch in 2011 and then later other ereaders including the Kobo Aura H2O, but it’s now making a comeback.

E-ink and Kobo have just announced a new program called Kobo eBook Access which, when you filter out the marketing spiel, is effectively a revival of Kobo’s earlier hardware project. This time around Kobo is going to focus on getting their app on to Android ereader hardware (like the ones I’ve been talking about lately), starting with the Sony Readers. Sony got out of the ebook business earlier this year and handed its customer lists over to Kobo, after which a new firmware was released for the Sony Readers which integrated the Kobo ebookstore.

"We look forward to working on this initiative with E Ink to further Kobo’s mission of getting more people, reading more often on any device they choose," said Scott Cleaver, executive vice president, Supply Chain and Partner Management at Kobo. "We’re truly excited to see our comprehensive eBook store made available on other E Ink-based devices, thanks to this great program led by E Ink." 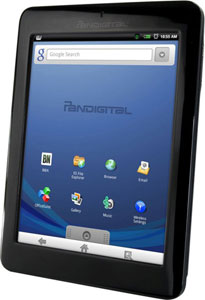 Kobo’s past hardware partners included Pandigital, which in late 2010 loaded the Kobo Android app on one of the first 7″ budget tablets (the black Novel, to be exact). There were also several Kindle clones with 7″ LCD screens. Those devices featured keyboards and  unremarkable performance (I think I still have a couple).  I also know that Southern Telecom released a 5″ device under the Slick brand, and there were very likely other models released in other markets.

When I first read this press release, I immediately flashed back to those older devices with a feeling of dismay. Several of those older ereaders were junk, and they only hit store shelves because the manufacturers had no shame.

But just because Kobo’s older partners released bad hardware doesn’t mean its new partners will as well. eReader hardware has improved significantly over the past 4 years, so much so that even generic Chinese OEMs are now producing ereaders worth buying.

Now is a good time to recruit those OEMs as partners.

No new partners have been announced at this time, although I can think of couple Chinese OEMs, including Boeye, who might be interested. While many of those companies have their own reading app already, not all of the apps include an integrated ebookstore. What’s more, some of those apps were created for the Chinese market and would be less useful outside of China than Kobo’s app. If those OEms can ship their hardware with  Kobo’s app then it would likely be much more appealing to western resellers.

Heh. I hadn’t thought about that, but you’re right.

am looking for an investor who will be willing to invest in E-reader Business.

In the past few years i have been in E-reader business and have i realized that am the only one in East africa selling E-readers and in most cases going out of stock, I am increasingly adopting the digital route and am being met with impressive demand

According to technology analyst firm Ovum, 150k e-readers were being used in Kenya by 2014. Ovumpredicted that this figure would rise to 350k or more by the end of 2015
Of this market, Amazon’s Kindle enjoys a share of nearly 60%, Barnes and Noble’s Nook holds a 25% share and the Kobo is hanging in there with a 10% share.
Schools in Kenya are increasingly turning to e-reading as a solution to the sheer expense of educational text books and their resulting scarcity. In a country where leaders are pushing for more technology for students (in 2013, Kenyan President Uhuru Kenyatta pledged to provide free laptops to all schoolchildren), a kindle may be a more practical solution if well convinced. The device can hold a charge for two weeks when Wi-Fi is turned off, which is a boon in areas where electricity is scarce.
E-readers can have an even bigger impact in the developing world than in the developed world, because the need is so great and costs are coming down so quickly

we are ultimately looking the investors to bring e-reader into the developing world.