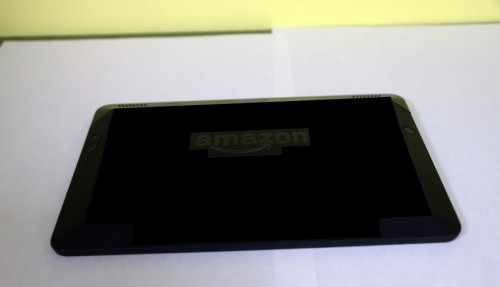 Amazon’s latest teaser leak arrived today in the form of a set of hands on photos. Feast your eyes upon the new 7″ Kindle Fire HD tablet.

The photos only show the new 7″ KFHD but not the new 8.9″ model, and they support past rumors that the new tablets would have "a more angular design with a flat slope out to the edges instead of a curved slope, and corners that aren’t as rounded."

The front also reveals that the new 7″ tablet has a radically different appearance. 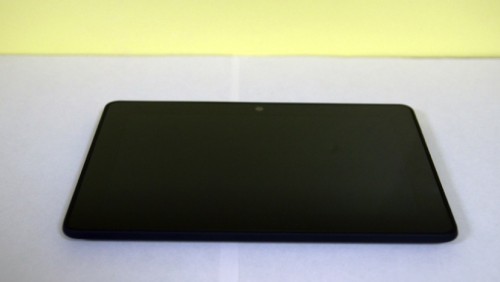 It’s not clear to me whether this tablet is Soho or Thor (respectively the new Kindle Fire or the new KFHD), but the original source is saying that this is the new KFHD. The photos come from Boy Genius Report, and their rumors have proven reliable in the past.

And even if they hadn’t, other sources independently corroborated the BGR rumor with details about the codenames, screen resolution, and there is even a leaked benchmark.

The 7″ KFHD shown above and below is expected to be running Android 4.2.2 on a 2.15GHz Qualcomm Snapdragon CPU. It’s going to come with a 1900×1200 resolution screen, a minimum of 16GB of  storage, 2GB of RAM, Wifi, the front-facing camera shown in the photo above, and optional cellular connectivity.

As you can see, the new tablet is keeping the speakers on the back, and like its predecessor it does not have a microSD card slot. This tablet is predicted to be shipping sometime in the next month or so, but the larger 8.9″ KFHD might not get out the door until November.

There’s no word on price, but given the more expensive CPU and screen I think the price could go up from the current $199 for the 7″ KFHD.

The Future of eBooks? Streaming is Now 21% of Music Revenues in the US

At this point, changes to screens and internal specs are evolutionary and not revolutionary. Don’t get me wrong, device evolution is almost always a good thing. But if you ask me, the single-best improvement it appears Amazon has made is to the volume and sleep/power buttons.

I can’t tell you the number of times I have accidentally hit those buttons on my KFHD. I’m glad they were moved.

I have the Kindle HD 8.9 with an ottercase. The ottercase really helps define the buttons. I haven’t had too many problems other than it adds to the tremendous weight of the beast. That saying, the new Kindle Fire HD needs to shed a lot of weight before I consider it for an ereader. I just use my larger one to watch movies and as an alarm clock.