Map: Where in the World are comiXology and Digital Comics Fans?

buy digital comics from comiXology there’s a 50-50 chance that you aren’t in the US.

ComiXology reports that they saw great growth in 2013, and as part of showing off how well their international plans are progressing they released the following heat map. This service now offers over 45,000 comics and graphic novels from more than 75 publishers, and that immense catalog is proving to be popular around the world.

ComiXology was the most popular non-game iPad app for 2013, and it is also the top iOS Book App in Australia, Brazil, Canada, Chile, India, Mexico, The Netherlands, New Zealand, the Philippines, & many more. 51% of comiXology users are outside the US and can be found in countries as diverse  China, Brazil, and India. 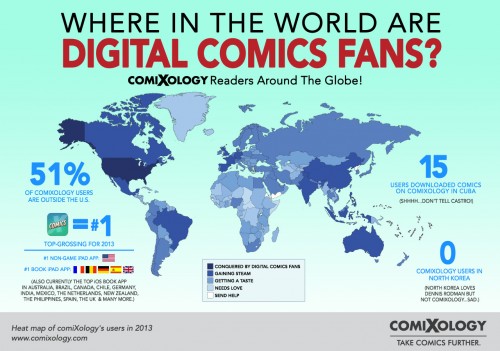