It’s easy to find Linux, Android, and even Windows on an HDMI dongle to plug into your TV, but if you want to try Firefox OS you’re going to have to wait for a bit (or roll your own).

The makers of the Matchstick TV HDMI dongle announced on Kickstarter this week that have decided to push back the release of their device by 6 months. This dongle had been successfully funded in October 2014 with a promise ship date of early 2014, but now the earliest we’ll see it will be August 2015. 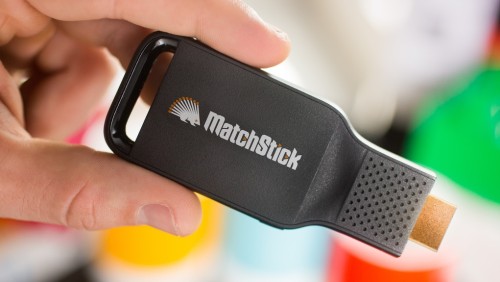 The developers say that they want to update the hardware and rework the software before finally releasing the Matchstick, and rather than string everyone along they choose to be completely honest about the delay.

The Matchstick TV is a Chromecast-like or FireTV-like device with an HDMI plug on one end, a microUSB port on one side, and Wifi under the hood. It runs Mozilla’s Firefox OS on a dual-core Rockchip CPU, or at least it did.

The new Matchstick TV is going to feature a quad-core CPU, with improved software to match. Other planned hardware revisions include improved Wifi, but they haven’t shared much about that yet.

The big story today is the improved performance enabled by the more powerful CPU. The revised Matchstick TV is going to be faster, of course, but it’s also going to support DRMed content providers. As you know, many premium content providers like Amazon, Netflix, and Hulu  require DRM support or they won’t even talk to you. In adding DRM support, the Matchstick TV developers have made it infinitely more useful to the average user who just wanted to stream some videos.

The Matchstick was originally developed so a user could mirror a website, app, or video from their PC, smartphone, or tablet onto their TV. With this new update, the Matchstick should be able to interface with content providers directly.

The Matchstick team raised over $470 thousand dollars (the original goal was $100,000) through a campaign on Kickstarter last October, which means that they should have more than enough funds to get the Matchstick TV into production.

But will they have enough to produce and ship units to all of the backers? That’s another question. Of the several hardware crowdfunding projects I’ve followed, all ended up having to take on capital financing in order to finish what they’ve started.

While that could happen here, the Matchstick project differs from most other hardware crowdfunding projects: it’s open source. It has the support of a larger community, which means its development costs are different from the projects which sought to develop and ship a product.

The fusion of PC, tablet, and computer marches ever onward.

[…] just a web browser, Firefox is also an OS designed to run on smartphones, tablets,  the occasional TV dongle, and many other devices with Intel and ARM […]