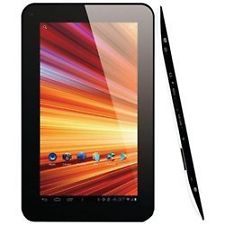 Datawind announced the US release of the Ubislate 7Ci Android tablet yesterday I knew it wouldn’t be long before a competitor released an even cheaper tablet. And now Microcenter has.

The Azpen A700 is the most basic of 7″ Android tablets. With a single core CPU, VGA camera, and 4GB of Flash storage, this tablet is a steal at $40. (No, seriously, I would deeply appreciate it if someone would steal the one I have.)

The A700 originally shipped about a month ago. It runs Android 4.2 on a 1.2 GHz CPU with 512MB RAM, Wifi, and a microSD card slot. It also has a speaker, microphone, and a g-sensor. Weight is estimated at .77 lbs, and battery life is specced at 4 hours.

There’s really not much to read in the Microcenter listing, but early user reports confirm that this tablet has Google Play as well as the rest of the standard Google apps. My source also noted that this is a rather ugly and bulky tablet which seems to be convinced that it is a smartphone.  That same early user says that the 7″ screen isn’t too awful given the price and resolution (800 x 480).

The A700 is only available in Microcenter stores, and that’s going to make it rather hard to acquire. But if you do get one you might want to install a replacement firmware. This tablet is the subject of a thread at XDA Forums where it has already been rooted.

So should you get this tablet?

I wouldn’t recommend it, but if you have to get a tablet in this price range then the A700 is definitely a better value than the Ubislate 7Ci. The A700 is sold by a retailer that has a not unreasonable return policy, and it has Google Play. That counts for a lot, trust me, because it makes the tablet more useful and because says that the A700 met a certain minimum standard in order to get Google Play certification. The Ubislate 7Ci did not, so I would be willing to bet it is inferior.

And if you don’t live within a reasonable driving distance of a Microcenter store, you might also want to look at the $50 tablet that Chris meadows found at Office Depot and wrote about on Teleread.

Bookstores Aren’t the Future of POD – Print Shops Are

Sounds a lot like the $50 one I mentioned Office Depot having the other day. Different brand name, but maybe same OEM.

I was thinking of that tablet when I wrote this post. It just goes to show there’s no end to the cheap junk out there.

And that reminds me; I should have mentioned you. Fixed it.

These specs are really common for cheap tablets. Polaroid alone has released about a dozen tablets with a single-core processor, 512 MB RAM, and 4 GB flash memory. Almost all of them run at 1GHz, even if the specs say higher. The processors can run faster, but the tablets will overheat if clocked much higher.

Still not feeling buyer’s remorse over the 32GB 2013 Nexus 7 I bought a few months ago.

My sister and got six of these for my grand kids and hers. Ages 17 months, 4 years, 7,8,9 years, and I got one for reading and playing games. I don’t have any major NEED for a "REAL" tablet so this is enough. I downloaded a bunch of apps(including Netflix) on my phone and laptop and copied them to the kids tablets. Great for quiet time in a cramped hotel room. Then the next day I went out and bought some really cheap headphones!! The day after that I found a good deal on the ones that cover the whole ear! Perfect! The kids love having their own, now I don’t have to worry about them all wanting to be on my laptop or phone (at the same time) when I come to visit. Plus, I’m not ready to trust them yet with the expensive stuff.

I just picked up an Azpen A727 a couple days back at Micro Center for $20. It’s got a 1.5Ghz dual-core processor, with the same half gig of RAM and 4GB storage. Threw a 16GB uSD card in, rooted it. It’s actually really nice, but I don’t like that they decided Jellybean was a good idea. Kitkat is much more optimized for lower specs.