Microsoft has officially launched a slew of apps for Android this week.

In addition to a new Outlook app for Android (and iOS), Microsoft has also released new Office apps for Word, Excel, and Powerpoint which have been customized to run on Android tablets. 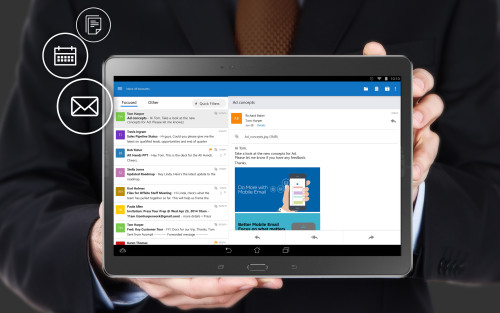 Techcrunch reports that the new Outlook app replaces Microsoft’s existing apps, and is  based on the application it acquired when it bought Acompli for $200 million last month. Early user reports suggest that the new app looks and feels a lot like the older Accompli app (which is still available in Google Play and iTunes), although TechCrunch says that Microsoft has already added a few minor Office-app like touches, including a colored ribbon-like UI. That’s quick work, considering that MS has only owned Accompli for a couple months.

The new Outlook app is free in iTunes and Google Play. It supports Gmail, Outlook.com, Yahoo! Mail, and Office 365, as well as most other email providers, and it also supports sending attachments through the leading cloud storage services. 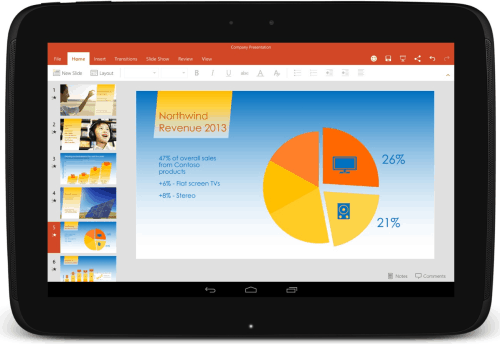 In related news, Microsoft also rolled out new Office apps for Android tablets today, but I don’t think they’ll prove to be of much use to most Android users.

It’s not just that some of the premium features require an Office 365 subscription, but also that the new apps require a 7″ or larger tablet running KitKat on an ARM chip with 1GB RAM. Intel chips are not supported, and Lollipop is not officially supported (nor are earlier versions of Android). Support is expected in the next few months.

But if you fall into the narrow band of supported users, I have good news. You can now create, view, and edit documents in official apps for Word, PowerPoint, or Excel on your tablet.

Microsoft was wise to release these apps for free; it’s not just that they add value for anyone whose employer is funding an office 365 subscription, but also that MS has a lot of competition for office apps on Android. In addition to several paid alternatives, there are a number of free office apps like SoftMaker Office, AndrOpen Office, and Google Docswhich are just as good and don’t come with Microsoft’s strings attached.

Now, THIS is a very un-MS move. I see how this adds value to their subscription service, but not how it supports their Surface devices or extends their OS hegemony.

MS already had apps for Android; these are just tablet variants.

I don’t know how they compare to the PC versions; I use Libre Office on my Win7 laptop, and I can’t find a post which compares the Android and PC versions of MS Office.