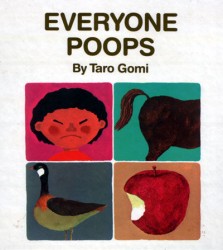 If 2010 is remembered as the year Amazon declared war on the publishing industry, then 2012 will be the year that publishing struck back. Educational Development Corporation (EDC), publisher of the Usborne and Kane Miller books, announced today that they’re pulling all of their books from Amazon.

They’re pulling everything from a backlist of over 1500 titles (including perennial favorites like Everyone Poops). This marks the single largest publisher to break ties with Amazon to date, and I seriously doubt that it will be the last.

TBH, this isn’t such a big deal; EDC was already halfway to this point. They first decided to pull back from dealing with Amazon in 2009, and since that time the only way EDC titles showed up on Amazon was via a wholesaler. Really, today’s move is only an expansion upon previous policy, not an earth shattering. The only real change today is that EDC’s wholesaler partners won’t be allowed to supply Amazon either.

So EDC won’t be losing much from this; in fact, online sales made up only a small percentage of revenues in 2011 (13%).

On the other hand, this could be the first of many publishers breaking ties with Amazon. These things tend to snowball. Do you remember how first Barnes & Noble and then Books-a-Million, Indigo Books & Music, and IndieCommerce decided not to carry any Amazon published titles in store? That took less than a week.

We could see a similar response here. I half expect to see one of the major publishers follow suit this week. They’ll do the math and realize that they can take the hit. And I expect it to happen this week.

This assumes, though, that the publisher relies as little on Amazon as EDC does (did).  EDC had already survived breaking up with Amazon in 2009, so finalizing the separation was minimally painful.

In any case, 2012 will be a very interesting year.

Kindle Store to Launch in the Netherlands in October?

Jeff Bezos is delightfully vague about the Amazon Tablet

As the shift in consumer buying continues to move toward digital, this is another reason why authors should retain their eBook rights and read the fine print of their contracts. Or, like many like me, become an indie author.

After all- it’s 2012, most manufacturers aren’t intimidated by the thought of running their own website, and it’s more efficient (and higher margin) to just ship directly to the consumer.

This is particularly true for manufacturer’s whose products are poorly rated on Amazon, or that never make the "recommended" box, or that are frequently counterfeited by 3P sellers.

For those products, Amazon’s only real contribution to the value chain was their ability to bypass sales tax collection even when the manufacturer themselves had local infrastructure. And that’s going away.