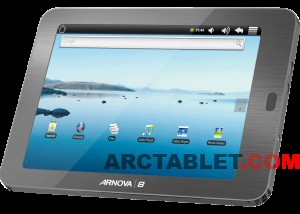 . I bought one earlier this week and it should arrive tomorrow.

It’s based on an 8″ (800×600) resistive touchscreen, and it has Wifi, 4GB Flash, a microSD card slot, speakers, and a microphone. It’s running Android v2.1 on a single core Rockchip CPU.

In terms of price vs specs, this tablet earns a resounding meh. It costs $159, which is okay for the adequate specs.

I’m particularly looking forward to trying the new hacked firmware. Yep, it’s only been out for a few weeks and someone has already hacked it. Assuming it works (I break things), this firmware is based on the existing v2.1 and it adds Android Market. There’s also a version with v2.2 Froyo in the works.

Good on you! If the resistive pad is responsive, a cheap tablet is a wonderful thing. The 800×600 display is especially nice, in that the 600 pixel width is the tipping point for optimal manga and comic viewing.

Tablets are Magical and Revolutionary, but so is a Microwave Oven, even if you mainly use it to nuke burritos. The dirty little secret about tablets is that most of their best uses are mundane (ebook, manga, remote,photo viewing , light surfing and video) and can be done well by a cheap model.

Glad to see you are using expedited shipping.

Why do you keep wasting money on crap like this?! Save it for the good tablets: Asus Transformer and HP TouchPad!

Which is the best ebook reader for this tablet. We got one but Kindle app doesn’t work (can’t scroll pages so it misses out chunks of text even on smallest font setting)