My Nooklit Has Arrived (First Impressions) 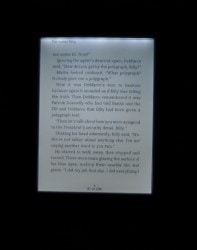 Barnes & Noble’s newest ereader, the "Nook Simple Touch with GlowLight Technology", started shipping on Tuesday, and my unit got here today. I’d only seen it for a few minutes in a store on Monday, but what little time I spent with it intrigued me. I ordered one Tuesday because I wanted to take a good look at it. There’s a lot that you cannot tell about a device until after you get it off the showroom floor.

After playing with it for a good hour in the dark, I can say that most of my impressions from the Monday fondle held true.

The Nook Glow is virtually identical to "The All New Nook Simple Touch", so I’m going to skip most of the details about the reading features and focus solely on the screen.

Like you’ve probably read elsewhere, the Nook Glow has a light in front of the screen, not behind. The light is emitted from a layer laying on top of the screen. This is an important detail because at least one of the launch day reviews said that the Nook Glow had a noticeably degraded screen quality.

I disagree. I have a Nook Touch, Nook Glow, and a Kindle Touch on my desk. I cannot see any real difference between the 3. The gray bezel around the screen on the KT has a bigger effect on the screen qualities. And that is coming from someone who is exceptionally picky. I can find fault in perfection (it’s too perfect).

The Nook Glow has a slider so you can adjust the amount of light its putting out. This is good because I found that I could read comfortably with the light set to the dimmest setting. The highest setting is as bright as shown in the commercial. You can use the Nook Glow as a flashlight if you like. In fact, the screen is bright enough that you could probably use it to signal with Morse code at night.

One of the launch day reviews said that the Nook Glow had a gray bar across the top where it wasn’t lighted as well as the rest of the screen. They also said that the light was uneven, with some lines of text looking brighter than others. I can confirm the gray bar, but it’s not an issue. It’s usually up above the text on the page.

But I’m not so sure about the unevenness of the light. Yes, you can see it in the photo, but I’m not sure that it will bother you all that much while using the Nook Glow to read.

You’ll have to decide that for yourself.

One reason I got the Nook Glow was that I was looking forward to hacking it and turning it into an E-ink tablet. I know a number of people who love their Nook Touch, and I though the addition of a light would only add value.

Nope. The problems with the lighting might not bother you while reading but they could be serious issue when the Nook Glow is used as a tablet. I think I would be more likely to be bothered while playing a game or browsing the web.

But that’s just my opinion. What’s yours?

[…] wasn’t there to see it. Luckily for me the demo units have started arriving in stores.Update: I got my hands on one.My not-so-local Barnes & Noble store got their demo unit in today and I made a special trip up […]

Nate, how do you think this front light screen tech would make the JetBook Color look?

Do you by any chance have an REB-1100 or GEB-1150 among your stash of vintage toys?
If so, how does the brightness compare?

Several. The Nooklit is either as bright or brighter than my 1150.

Thanks.
Now to see if/when a lighted Kindle shows up.

>>>The problems with the lighting might not bother you while reading but they could be serious issue when the Nooklit is used as a tablet.

Huh? You need to explain that more.

Yes, indeed. I need an explanation too.

My biggest worries were about the contrast, it is a relief to see it’s not much of an issue.

Mine arrives today. After reading your post I am excited and can’t wait to get mine.

Any idea how the light affects battery life?

According to B&N, using the light cuts the battery life in half.

«I cannot see any real difference» — are you sure: http://bit.ly/Iy1oS1

Engadget was one of the few (only?) that mentioned it and posted a picture. They also don’t reference their pictures, so that could just as easily be a picture of the screen with the light off and the light on (the color tone sort of suggests that). If it were a side-by-side comparison picture, then it is also possibly an artifact of the way they light their devices and not indicative of real-world usage.

I have no comment since I haven’t been to see one yet, but almost all of the reviews are in agreement that screen quality is not sacrificed.

Well, the following text follows that screenshot: «[…] when placed next to the original Nook with identical pages on the screen, there’s significantly less contrast with the text here […]», so I don’t think it is a photo artifact or a backlight.

And yes, the E’s was probably the only review that used words like «significantly less contrast», but then again — there are just few reviews that actually cared to compare.

I do hope that the difference was unique to their device (an early promo batch maybe).

Nate, can you please look at the shot and comment how different it is in your case. Both you and your retail device are more trustworthy than E in this matter.

Now that the screenshot has been pointed out, yes the Nooklit screen looks grayer. Does that qualify as a significant difference? I don’t think it does.