I’ll be there to cover it (I came perilously close to not attending this year), and this is what I will be carrying around in my gear bag. 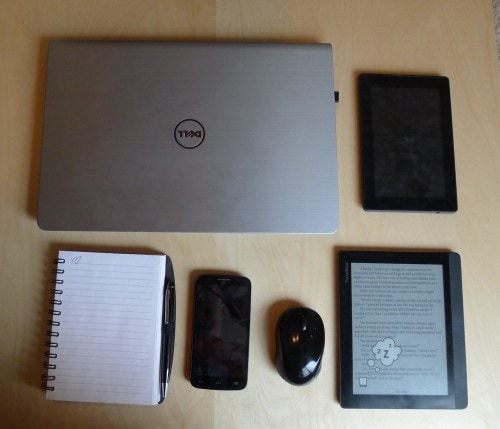 To start, let me cover what’s not in my bag: I don’t have a 4G hotspot, and I don’t have a backup battery. The latter has never proven useful, and so far I’ve managed to avoid the need for the former. Sure, that runs the risk of not being able to post, but that’s never been a serious issue.

But I do have a new laptop.

For the past couple years I carried around a Lenovo u410, a 4 pound macbook clone with questionable battery life. I would be carrying it to CES 2015 if not for the hinge breaking.

And since I don’t have another laptop or even another computer to work on while the Lenovo clonebook is away getting repaired, I’ve had to replace it.

My new primary work laptop is a 5 pound monstrosity with a Core i7 CPU and a 15.6″ screen. It’s far more power than I need, but it was on sale, met my needs, and came with an onsite repair warranty.

While it is about twice as heavy as the better ultrabooks (Brad Linder’s laptop weighs 2.4 lbs), it also costs about half as much. I browsed Win 7 laptops for a few weeks before buying, and found that each time you reduced the weight by a pound you added another $300 to the price. And since I don’t travel much I can’t justify paying the higher price for the lower weight.

FYI: The sound is terrible, so I would not recommend this model.

As always, I am going to be packing along a wireless mouse. It’s the same one I use at home, and what can I say other than it is easier to use than a trackpad. I also have a full sized USB keyboard, but that will likely stay in my hotel room.

For some things, paper is still the best.

This is the one item not in the photo because it’s what i used to take the photo. This is a semi-pro camera which I bought 3 years ago. It has far more settings than I need and still works as good today as when I got it.

For the first year ever, I will be carrying a smartphone. I used to make do with a flip phone, but when the last one konked out on me I decided to go crazy and spend $250 on a budget smartphone. It came with a year of service, 1.2GB data, and 1,200 minutes.

It’s not much of a smartphone, no, but then again I don’t need much.

More of my time will be spent over the next week simply getting from one venue to another (as well as waiting to get in, waiting to get on the monorail, etc) and so I will be carrying this 8″ ereader to keep myself entertained during the downtime.

I’ve said before that I like the InkPad, and I still feel that way. As someone who has been a reading on tablets since they were called PDAs, this is one of the two ereaders I have reviewed this year which have tempted me to read on an ereader (the other is the Boyue T61, a Chinese Android ereader).

And last but not least, there is my 2013 Fire HD tablet. I’m still not completely sure I will be carrying this tablet during the day or even bringing it along on the trip, but I have packed it.

Part of the reason I am thinking of leaving it behind is that I want to reduce the number of distractions which might keep me from getting work done. (This is also why I haven’t installed any games on the new laptop.) The Fire HD is an entertaining toy but it is also a time suck.

Onyx is Working on an E-ink Smartphone (video)

"Notepad and pen — For somethings, paper is still the best."

I stick with what works.

The really nice thing about pen and paper is the built-in encryption (no one can read my handwriting). If I typed notes on a tablet then anyone could read them.

You should really try a Galaxy Note 8, Nate. It’s replaced pen and paper for me.

Speaking of pen tablets, if you see any new Wacom or Ntriq based tablets with pens, please get some pictures for me lol.

I’m getting ready for the best of CES that never happened:
http://youtu.be/kT900-qqjKs

Plus you will want this: great Mexican food, and they will pick you up for free to go to Desert Rd. location, the best one. Great way to momentarily escape the crowds of CES. Have fun, avoid the various plagues. http://lindomichoacan.com