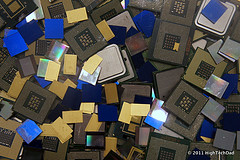 Neonode is a name that all my readers should recognize; they make a cutting edge IR touchscreen component that can be found on many leading ebook readers. But that’s not all they do. Today Neonode announced that they were about ready to release a new optical touchscreen controller chip.

The NN1001 was developed in partnership with Texas Instruments. It combines several existing components into a single chip, thus reducing manufacturing cost. Neonode says that it is going to cost about the same as existing resistive touchscreen controllers, which will make it competitive with existing controllers on the market.

It’s not clearly stated in the press release, but I’m guessing that this chip is intended to work directly with the zForce touchscreen. That means that the next ereader to use Neonode 's touchscreen tech is going to be that much cheaper.

A demo unit using this chip will be on display at CES next week. It’s reportedly going to be a automotive application. But other than that there’s no word yet on what devices will use the new chip, though Neonode did say that it will hit the market in late 2012.

Just wondering – is this tech in use for any other type of screen apart from e-ink? I mean – I’d love to see it in a netbook or even a fullsize laptop at some point.