Unified School District released a new budget for their $1 billion 1:1 iPad program earlier this week, and it revealed that the first phase of the program will be considerably more expensive than the school district had previously claimed.

The new budget includes new details about ancillary costs as well as a revised list price for the iPads. The LAUSD isn’t paying $678 for each iPad; they’re paying Apple $770 per tablet.

It turns out that the lower price had been negotiated based on the LAUSD’s plan to buy half a million or more tablets at a cost of over $400 million. But since the school district has at this point only purchased a few thousand tablets they are instead paying a higher price. 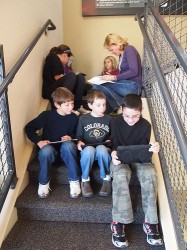 Some LA teachers have been told to hold classes in the stairwell so the school district could use construction funds to buy the iPads.

The original budget had $20.3 million set aside to buy iPads. The additional cost boosts the budget for the first phase of the program by about $4 million, and it’s not the only place that LAUSD low-balled their cost estimates. They’re also going to have to spend more to buy classroom charging carts, which are used to charge the iPads and keep them secure. The cost for the carts needed for this first phase rose to $3.2 million from $2.6 million.

When the LA Unified School District announced their plans for an immense 1:1 iPad program this Summer, the program was hailed as a billion dollar poster child for the right way to raise the educational standards and offer LAUSD’s poor and disadvantaged students more educational opportunities.

But in the time since the program launched it has been revealed that the school district was unprepared: logistically, technologically, and financially. Its many problems include funding (25 year construction bonds), security (students easily bypassed restrictions), and device management. The program is currently in hiatus with all of the iPads back in the school districts control. Or rather, that was what was supposed to have happened; several hundred iPads went missing and are still unaccounted for.

Unfortunately the program has yet to be cancelled completely, but it does look like the completion date will be moved back a year; LA schools superintendent John Deasy floated the option at a meeting last week.