It’s been quite some time since I last saw something new in the field of ereader design but I think a designer by the name of Fabrice DuBuy has pulled it off.

I’ve just found a new ereader concept on his website that features an E-ink screen that goes from one edge to the other, only it doesn’t use the edges of the screen to display text from a story. Instead they are reserved for a special purpose.

Rather than have pop up menus obscure the text you are reading, this concept design puts the menus in the margins.

As explained on the website, the menus would only appear if you double tapped the margins. I believe that is intended to let you also use the margins for page turns (a single tap), but I suspect that in practice users will regularly bring up the menus without intending to.

The designer has also posted images of a dual screen design that would place the menus on the hinge  between the pages: 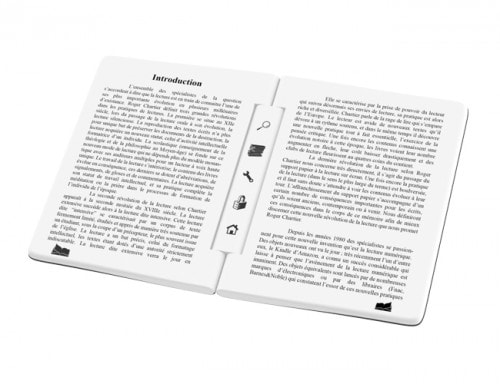 I think that could end up being a lot less convenient, not to mention more expensive. The dual-screen concept would require 3 screen elements, raising costs even higher than for a simple 2 screen design.

Why the Kindle Really Beat the Sony Reader (Or, Fast Company is Full of Crap)