New Kindle Paperwhite Is Up for Pre-Order

Thanks to the KPW going out of stock we’ve all guessed that Amazon was probably going to launch a new model fairly soon, and thanks to a leak Amazon has removed all doubt.

Update: The product listing for the new KPW is now live. I ordered one, and it is expected to ship on 30 September.

Engadget has posted a link and a screenshot for the product  page for the new Kindle Paperwhite. That’s right, Amazon isn’t going to change the name of the 2013 model touchscreen-equipped Kindle; they’re keeping the name and they’re going to improve the specs.

We don’t have full details yet but the listings mention an improved frontlight and touchscreen, a whiter screen (described as "all-new paperwhite display"), a faster CPU, and a number of new software features. This ereader is expected to ship by the end of the month. 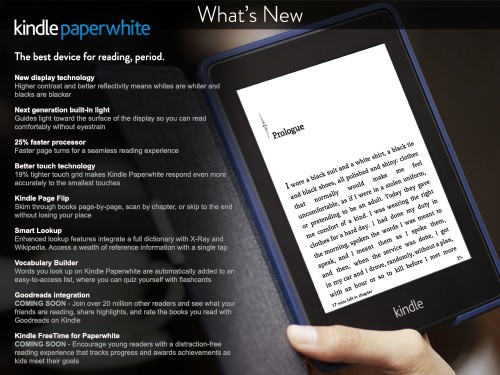 The 2013 KPW is going to get Goodreads integration, new parental controls, a vocabulary builder, and new navigation options.

It doesn’t appear that the parental controls will be available at launch but when it is released in an update it will let parents restrict what kids can do on the ereader similar to what Kindle Freetime can do with the Kindle Fire. The Goodreads integration will let you be more social in your reading, and the new vocabulary builder will help you with studying and learning.

All in all this strikes me as an improvement to the existing ereader and not really a new device. This is similar to the way that the Kobo Aura is an improved and updated Kobo Glo.

Update: After re-reading the listing I have changed my mind. We could be looking at a next generation screen on the 2013 KPW, and that is more than an incremental improvement.

Both new ereaders have improved hardware and new software features, but that might not be enough to justify replacing your current ereader. If nothing else Amazon has a history of releasing updates for older Kindle models. The 2011 era Kindle Touch, for example, received an update only last month. 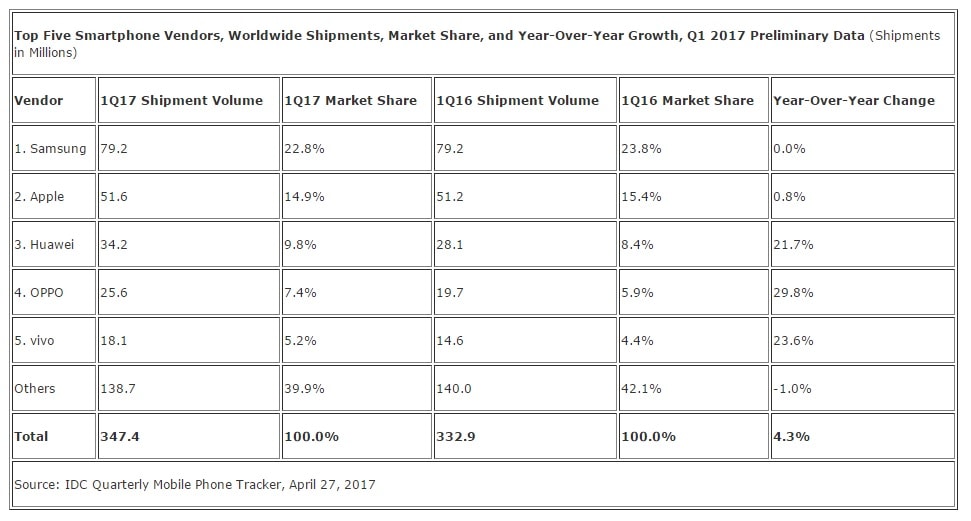 Except the resolution hasn’t increased, and how can we tell that there is a really new screen there? It hasn’t been announced and for all we know that test is just marketing copy.

Edit: I changed my mind.

Hey, maybe Amazon is engaging in hype and the "new technology" claim is bogus.

But, on the other hand, at the Kobo Aura intro last week, the Kobo exec dropped grudging hints that *somebody* would be using the new screens and since Amazon generally has first crack at eink’s "new and improved"…

What I find interesting is that, unlike Kobo and Sony, Amazon isn’t making any claims of flash-less paging.

Not trying to change you back, just pointing out that all we have is Amazon’s word that Carta is indeed, new tech. 😉

I’m waiting for some screen shots before I order mine.

Better contrast (unspecified), faster cpu … small improvements. The screen does not grow nor does it say anything nothing better resolution..

2GB of on-device storage is a deal breaker for me. An increase to 4GB would cost just about nothing today, but Amazon is doubling down on its cloud storage strategy.

Other vendors are moving towards 4GB and a SD slot. When my Kindle Keyboard dies I am going to have to switch to an ePub EInk reader for the storage.

I still temped in buying the Aura, just for the mobi, epub support so no more converting 🙂

Still lacks page turn buttons (the ones on the non-touch kindle are perfect, just graft them onto this one and you are good to go) and the ability to auto-organize using calibre. Not interested.

AlanW – I used to think that too, but after lots of frustration with the poor performance of my K3 with so much data, I only keep a few hundred books on it now, never sync (my Amazon account is over 11,000 titles and blows up my Kindle), always download and transfer via USB, and back up everything on my computer using Calibre.

On another note, this is the first time I’ve seen another about Matchbook. They are planning on offering the ebook version of any qualifying physical book purchased, back to the beginning of your account, similar to the music match. Although not all will be free, this could add hundreds of books to my account, I can’t wait to see how it works out! On the other hand, I’ve already purchased some old favorites as they’ve been on sale.