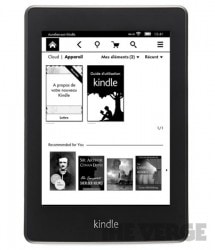 I might not yet be convinced that the Kindle Fire  image from earlier today is the real deal, but I’m finding it a lot harder to deny the set of leaked Kindle images which showed up about an hour ago.

The Verge has gotten a second set of leaked images today, this time showing a new Kindle Touch. As you can see from the gallery below, this ereader loses the button on the existing model and appears to replace it with a button which spells out Kindle.

According to the label in one of the renders this is the paperwhite Kindle. I can’t see much about this device, but if the screenshot in one of the product renders is correct I don’t think this model has sound. You can see the bottom edge in one of the product renders, and while it’s awfully fuzzy there doesn’t appear to be a spot for the headphone jack.  That’s a couple of rather curious details because the Kindle which cleared the FCC a couple weeks back was tested with headphones. And in another image one of the listed features is an integrated light, so if this is real then it could be the front-lit Kindle we’ve been waiting for.

In any case, I’m looking forward to seeing this device (or not, as the case may be) next week at Amazon’s launch event.

The weird thing is that it’s all in french.

And it seems there’s no buttons for page turning…

The Kindle Touch never had buttons for page turns.

But I wish it did.

I’m so excited!! Looks like better UI, lighting, better screen, better resolution, better design… and the only thing that is missing is a capacitive touch screen. Wow finally they update their UI!!!!! If this is real I will be preordering as soon as possible.

How can yo tell the screen resolution? This is a product render.

And why would you want a capacitive touchscreen? I think the current IR screen works great and doesn’t have anything in front of the screen.

My french is rusty, but Haute Resolution = High resolution.

But that’s not _higher_ resolution, is it?

No, but neither is High Definition, aka HD.
Why mention resolution at all if its unchanged?
You asked why anybody would expect higher resolution? Well, that’s a hint…
Might be a red herring or it might be the next step in Kindle evolution.

Yes, but the other detail says higher contrast. That’s why I’m thinking this isn’t an HD screen.

But I could be wrong.

As a French, I agree that "Haute Resolution" implies an higher resolution.

But marketese is often treacherous

I’m in the same post : wanting buttons, but knowing the real question is "will I buy it ASAP, or just wait a few days/weeks to be sure it works well ?"

The higher contrast could be achieved by the light, right? It advertises the battery time with the light on. Maybe HD screen + light.